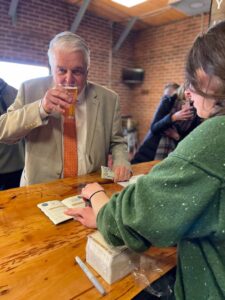 Was Sisolak drinking the day of his accident? Why the cover up? Why is Sisolak refusing to answer open records request related to his accident and drug screening? Who were the Asian men helping Sisolak clear out his car? Why did they conceal the identity of the woman Sisolak hit? Sisolak’s office has refused to answer these questions.

Las Vegas Metro Police have finally issued their official report which squarely blames Gov. Sisolak for causing a serious car accident turning left in front of oncoming traffic causing Sisolak’s SUV to end up sliding off the roadway into a local business driveway. Sisolak’s victim was slung into a pole. Sisolak was cited for causing the accident.

No toxicology reports has been obtained yet. The damage was so serious that both cars had to be towed away.

On page 3 of the report, Las Vegas Police state they’re seeking a search warrant to investigate Sisolak’s car including the onboard computer system. No conclusive word on whether Sisolak was on meds or had any substances legal or otherwise in his system.

None of the video of the accident from local business cameras were included in Metro’s initial report. 360 News has filed an open records report with LVMPD for all body camera footage from the accident.