WILL TRUMP PRAISE HELLER AT RENO VISIT THIS WEEK OVER VA ISSUES?HOW WILL VOTERS INTERPRET IT?

WILL TRUMP PRAISE HELLER AT RENO VISIT THIS WEEK OVER VA ISSUES? HOW WILL VOTERS INTERPRET IT? 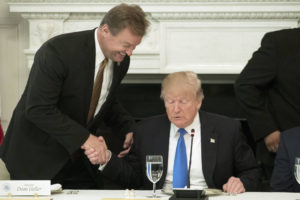 President Trump will be in Reno this week speaking at the American Legion’s National Convention about his recent legislative accomplishments on veteran’s issues. The question everyone is asking; will Sen. Heller stand with the president on stage?

Political observers are asking; if the President stands with and praises Sen. Heller’s efforts on veteran’s issues, how will that affect Danny Tarkanian’s campaign? Will the President meet with Tarkanian while he’s in town?

So far the Trump White House has refused to support Danny Tarkanian in his bid to unseat Sen. Heller. Danny has brushed off concerns as it’s too early and the President still needs Heller’s votes on key issues between now and next year’s midterm elections.

Sen. Heller has over $3 million on hand and millions more pledged by Senate Majority Leader Mitch McConnell. Tarkanian just announced two weeks ago and he needs to raise at least a million to compete.

Tarkanian held his first campaign rally at his office building yesterday led by Wayne Allan Root. About 50 people were in attendance, but to be fair, it was held outside.