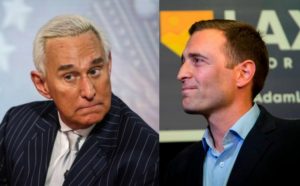 At noon on Election Day, President Trump finally relented and endorsed Adam Laxalt for Nevada Governor. But according to sources, Laxalt was far from Trump’s first choice.

Trump confidant, Roger Stone, had been actively looking for a better candidate for many months going back to January of this year. Stone thought Laxalt was too boring and dull and not a reliable Trump supporter.

Bundy has 90% name ID in the rurals and is a national figure that can potentially raise millions of dollars. In a recent poll match up of Ryan Bundy verses Adam Laxalt, Bundy carried 80% in Nevada rurals. With Bundy running now as an Independent, Laxalt’s chances of beating Sisolak are slim. Laxalt won the AG’s race against Ross Miller in 2014 without winning Clark County.