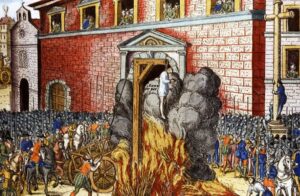 Every day, every article everyone posts about vaccines gets a FB label with a link telling folks how safe the new CV19 vaccines are. But can we trust these safety messages from FB about our health after they banned and blocked counter studies about medicines that showed great promise in peer reviewed scientific studies to treat CV19 last year? Doctors who opening reported their emergency room finds and peer reviewed scientific studies that indicated the dangers of mask were banned from FB, Twitter and even removed from Google.

Its a fact that FB removed people and posts at the requests of government officials that didn’t conform to the official government talking points or that challenged “official” government science. Its a fact that FB and Twitter removed Trump at Biden’s request. And this week, Biden demanded, publicly, that FB remove more people and posts that questioned his administration’s scientific conclusions.

Medical Science, like most sciences are never settled. They require constant questions and probing for new information. For a 1,000 years everyone knew the Earth was flat. For centuries Science said the sun revolved around the Earth. Anyone who dared question the “science” was labelled an enemy of the Church, an enemy of the state and killed. Being de-platformed from Twitter, Facebook and Google for many today its a fate worse than death.

Pietro d’ Abano (1257-1316) was an Italian philosopher, astrologer, and professor of medicine. He authored Conciliator Differentiarum, quæ inter Philosophos et Medicos Versantur, “an exploration on the relationship between contemporary medical theories and Aristotelian natural philosophy.”  Abano was arrested by the Church Inquisition and died in prison around 1316. He was condemned posthumously and his bones burned.

Cecco d’ Ascoli (1257-1327) was an Italian encyclopaedist, physician, and scholar specializing in mathematics and astronomy. He was a professor of astronomy at the University of Bologna and he was such a historic figure among astronomers that there is a crater on the moon named after him today. His feud with the poet Dante led to his trial for heresy and then he was burned at the stake in Florence.

Giordano Bruno (1548-1600) was a Dominican friar, mathematician, astronomer and poet. He is most remembered for his cosmological theories. After seven years of trials in Rome, he was condemned and burned at the stake in 1600.

FB and Twitter have actively blocked any opinions or studies or experts who have presented different but legitimate questions, answers, studies and research that goes to counter to the Government’s official science. FB and Twitter have become the defacto Church and State’s executioners in the 21 century, murdering the character and memory of scientists and doctors who dare challenge the “Facts”.