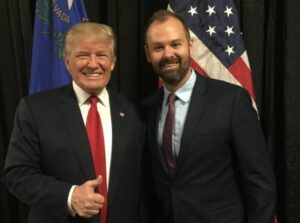 With the vote for the new Clark County Chairman scheduled for tonight at 7pm, the current Never Trump board voted in the middle of the night yesterday, to ban Jesse Law from running. Dave Sadjak and his corrupt group of lawless Never Trumpers pulled another midnight surprise out of their hat.

Their excuse, 10 year old false claims that Jesse Law used the Social Security Number of a previous CCRP Candidate for Chairman to dig up dirt unlawfully. But Jesse was never charged and there was never any proof of any such accusations ten years ago. Jesse has been a member of the CCRP since.

But there was ample evidence of the current CCRP Chairman Dave Sadjak being criminally arrested and charged with soliciting a prostitute here in Clark County twice and yet he was never removed from the Chairmen position let alone removed from the ballot 3 years ago.

Longtime political operative Jesse Law was endorsed today by President Trump along with his Clark County Republican Party leadership slate. The current feckless leadership of Dave Sadjak failed to raise any real money and refused to support President Trump and his folks in Nevada in the last election. Instead Sadjak chased away donors and volunteers alike.

Clark County is by far the largest county in Nevada with some 2.6 million people, many of whom are California escapees seeking economic and political freedom from Socialist Dems in Cali and now in Nevada. With Nevada Dems deeply divided between traditional liberals and socialists, Republicans actual have a shot at winning back state and federal offices if they can turn around the failed Clark County Republican Party. Jesse Law certainly has the experience.

Jesse Law came back to Nevada in 2020 to help the Trump campaign. After the election, Jesse led the fight against voter fraud in Nevada bringing a lawsuit on behalf of President Trump.

Pres. Trump’s support for Jesse Law to become the next Chairman of the Clark County Republican Party will test the political waters in Nevada. Never Trump forces in Nevada fight to block Trump’s team as he eyes another run for the White House in 2024.

The election for the leadership of the Clark County Republican Party will be held on July 20, 2021 at 6:00 pm at Spring Valley High School located at 3750 South Buffalo Las Vegas, NV 89147.