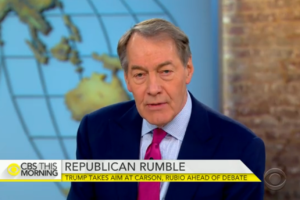 This morning, CBS Morning News with Charlie Rose engaged a conspiracy theory involving the Trump transition team and Mitt Romney. As many know by now, President-Elect Trump has been interviewing many people, including Mitt Romney, for Secretary of State. But, over the weekend, campaign manager Kellyanne Conway publicly blasted the choice of Romney as a betrayal of the millions of people who voted for Trump as Romney lead the attack against his campaign for President. According to reports, Trump was upset with Conway for her comments on the Sunday morning political talk shows.

CBS Morning News with Charlie Rose brought on a talking head who claimed the whole Conway/Trump issue was contrived and just for show. There wasn’t an ounce of facts provided to support the conclusion provided by CBS News or the talking head, but that didn’t stop the “Fake News”reporting this morning.