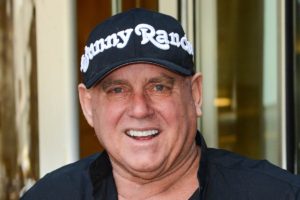 According to an emergency lawsuit filed over the weekend by Republican Assembly Candidate and Brothel owner Dennis Hof Nye County, the Nye District Attorney, his opponent Assemblymen James Oscarson and County Commissioner Dan Schinhofen, unlawfully impounded Hof’s A-Frame sign critical of them, from Hof’s private property, along the highway days before the primary election.

Hof’s lawsuit claims Nye District Attorney, Angela Bello, personally assured Hof’s lawyer that the county would not try to seized his A-Frame over the weekend after Hof moved the trailer onto his private property off the highway. But that is exactly what they did. Hof claims that after the court closed, the county took action and seized his A-Frame trailer. The county claimed the signed violated a sign ordinance and they had the right to seize it. But Hof claims the County only seized it to violate his first Amendment rights because the sign was critical the defendants who are on the primary election ballot this Tuesday. 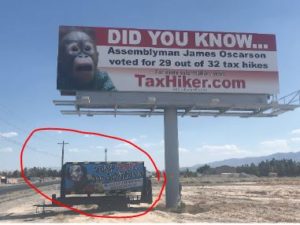 Hof is seeking emergency relief in Federal Court and seeks “a temporary restraining order enjoining Defendants from enforcing unconstitutional ordinance, and to immediately return the impounded political sign. The forced censorship against the Plaintiff, removing the sign from his property and not allowing Plaintiff to engage in activities protected under the First Amendment” 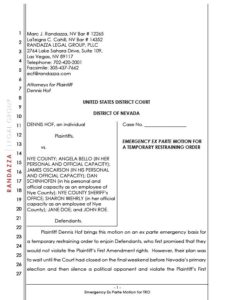