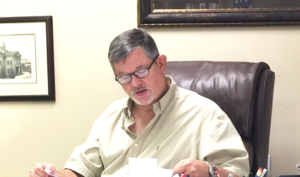 According to a very pissed off young Democrat activist inside GE consulting, a Democratic firm that provides services to Democratic campaigns such as phone banks etc, staff have been making calls for Republican Assemblyman James Oscarson since last Tuesday. The Democrat activist refused to make calls for the Republican Assemblyman and instead called 360 News. We agreed to keep his name confidential.

What’s more troubling is that Oscarson failed to list GE Consulting on his C&E report due June 8, 2018. The GE firm is owned by trade Union member and Democrat Consultant Greg Espinoza.

Dennis Hof said in response “It’s incredibly sad that RINO (Republican in Name Only) James Oscarson has to reach out to Democrats to make his campaign phone calls. But it makes sense when you see his voting record, he votes like a Democrat.”

360 News reached out to Assemblyman James Oscarson for comment but he never returned our call.