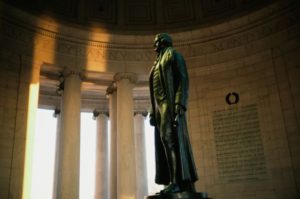 Modern day Progressive Democrats like to argue that the framers of the U.S. Constitution intended the 2nd Amendment to provide for an armed militia and did not to provide for an individual right to own firearms. But the militia was made up of farmers and citizens who were armed and ready to defend the country from oppressors within. Democrats use this argument to justify stealing our God Given Rights. Gun Ownership is a right not a privilege. Gun ownership is not about hunting, it’s about preserving freedom. Don’t believe me, read the words of the first Democrat, Thomas Jefferson and other founders. This is why Democrats resist teaching our Constitution in public schools.

“No free man shall ever be debarred the use of arms.”
– Thomas Jefferson, Virginia Constitution, Draft 1, 1776

“What country can preserve its liberties if their rulers are not warned from time to time that their people preserve the spirit of resistance. Let them take arms.”
– Thomas Jefferson, letter to James Madison, December 20, 1787

“The laws that forbid the carrying of arms are laws of such a nature. They disarm only those who are neither inclined nor determined to commit crimes…. Such laws make things worse for the assaulted and better for the assailants; they serve rather to encourage than to prevent homicides, for an unarmed man may be attacked with greater confidence than an armed man.”
– Thomas Jefferson, Commonplace Book (quoting 18th century criminologist Cesare Beccaria), 1774-1776

The right of the people to keep and bear arms shall not be infringed. A well regulated militia, composed of the body of the people, trained to arms, is the best and most natural defense of a free country.”
– James Madison, I Annals of Congress 434, June 8, 1789

“The Constitution shall never be construed to prevent the people of the United States who are peaceable citizens from keeping their own arms.”
– Samuel Adams, Massachusetts Ratifying Convention, 1788