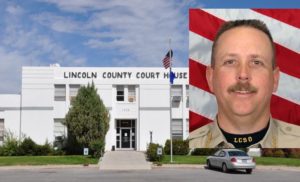 Yesterday, I drove up to Lincoln County and met with Sheriff Kerry Lee and several of the County Commissioners to discuss the 2nd Amendment Sanctuary movement. Commissioners Bevan Lister, Vice Chair Varlin Higbee and Commissioner Nathan Katschke all were extremely informed and, frankly, extremely frustrated by the Democrat Controlled Legislature ignoring their concerns on the Gun Background check law and on a host of other issues.

I was so proud to see Sheriff Lee of Lincoln County NV stand up at the County Commissioners’ Meeting and declare that he will not enforce SB143 after echoing the same concerns of his fellow Nevada Sheriffs. Sheriff Lee grew up in the rural county of 7,000 people but he and his department have the professionalism and experience of big city sheriffs, may be more. Sheriff Lee showed leadership yesterday when he stood up for his citizens against the Governor of Nevada, but took the time to explain his reasoning. So far about nine Nevada Sheriffs have publicly stated SB143 is unenforceable and they will not spend their time and resources to enforce it. In addition they believe the law is violates the U.S. and State Constitution and turns law abiding citizens into criminals.

The leadership in Lincoln County Nevada can only be described as highly intelligent and prepared. They will vote to add the County to the list at the next meeting.

Please private message us if your sheriff has taken the pledge so we can update the list.

We apologies ahead of time if we missed anyone.

Have Not taken 2nd Amendment Pledge