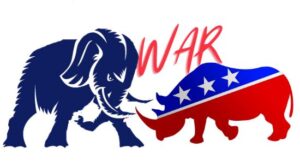 After Sandoval/Roberson Republicans screwed voters in 2014 by passing the largest tax increase in Nevada history, along with giving driver’s licenses to illegal aliens, a civil war broke out in the party. For several election cycles the Sandoval/Roberson forces battled the conservative Republicans in primaries. As time went on the civil war died out. So when Trump first ran in 2016, the Sandoval forces openly opposed Trump and lost their first real battle.

After the 2020 election, Nevada Secretary of State Barbara Cegavske and the Sandoval forces conspired with Dems to defeat Trump in Nevada by imposing mail in ballots. Trump lawyers provided some 122k cases of potential voter fraud to Cegavske through court filings in Carson City District Court and directly to her office. And to date she refuses to even look at them. Cegavske continues to publicly deny any voter fraud existed at all in Nevada.

The NVGOP led by Trump ally Michael McDonald voted this weekend to censure Cegavske. The vote among the Republican state leadership to pass the resolution banning Cegavske from the Republican Party passed 126-112. Republican leaders were exposed as Never Trumpers with that vote. However, several elected Republicans voted against the censure fearing Cegavske and her power over the election system.

Shortly after the vote, RINO’s came out across the state to defend Cegavske, led by Mike Roberson of course. Cegavske shot back as well through the mainstream media.

Now Trump Republicans are promising to purge those Never Trumpers from the party once and for all.