NVGOP VOTES TO BAN CEGAVSKE FROM THE REPUB PARTY

NVGOP VOTES TO BAN CEGAVSKE FROM THE REPUB PARTY 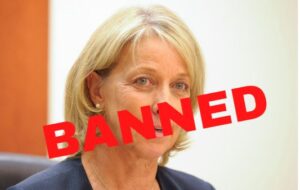 Yesterday in Carson City, the Nevada Republican Central Committee held their annual meeting where they passed a resolution banning Nevada Secretary of State Barbara Cegavske from the Nevada Republican Party after she refused to investigate any allegations of voter fraud in the 2020 elections.

The resolution officially censures Cegavske for “disregard her oath of office by failing to investigate election fraud, her dismissive public statements regarding election integrity concerns, and her failure to ensure compliance with Nevada and federal election laws.”

Cegavske went so far as to call the NVGOP liars claiming she never received any evidence of voter fraud even though the state party and President Trump brought lawsuits submitting 22 boxes of evidence in a State District Court in Carson City. BTW Cegavske failed to attend the court hearing.

The resolution banning Cegavske from the Republican Party passed 126-112 on Saturday.