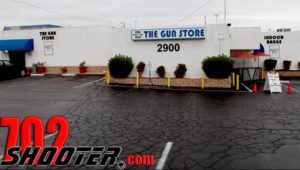 The general manager of The Gun Store on Tropicana issued a statement that their gun store will not participate in SB 143, the private gun transfer background check law. Following outrage by numerous counties and rural sheriffs, Nevada gun stores are now speaking out and refusing to conduct gun back ground checks for private gun sellers.

The Gun Store was one of the first gun ranges in Las Vegas to offer tourists firearms experiences. They have a huge selection of guns for sale, machine guns to shoot and CCW classes. (The Store did not pay 360 anything for this article)

Under SB 143, as of January 1, 2020, ALL Nevada citizens, even those with CCW’s, must transfer their firearms through a gun store. The law requires Nevada citizens to turn in their guns to Federal Firearms Licensed Dealers. The gun stores then conducts a back ground check of buyers for a fee and then turns the guns over to the new buyer after collecting sales tax. all of that can take which can take upto three or four days.

Besides the costly and complex compliance paperwork required by the law, The Gun Store manager fundamentally disagrees with the law and wants nothing to do with it. The Gun Store seems to be leading a trend of gun dealers throughout Nevada who are refusing to support the gungrab laws passed by the Democrat dominated Nevada Legislature which is setting up a serious legal issue. If all the gun stores in Nevada refuse to conduct private gun sale transfers, does that make SB 143 unenforceable and null and void?

Private gun transfers are required in California, but LA County has shut down almost all the gun dealers, so there is almost nowhere for gun owners to transfer their guns. In other California counties, gun dealers regularly charge $100 or more to transfer firearms.

Since when does a citizen need the government’s permission to sell their private property? Could the government require a background check before you can sell your knives, cars or anything they deem a “potential threat? Some how did we have survived for some 240 years as a nation before these laws came into effect. The real question is, can we survive as a free people after these laws go into effect?

Gun Ownership is a RIGHT, not a PRIVILEGE.