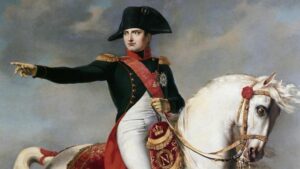 Almost immediately after the end of the American Revolutionary War, there was a divide among the elites in the U.S., between those who wanted to re-establish ties with King George (for trade and heredity) and those who wanted to support the French who were instrumental in helping us defeat the British Crown. Thomas Jefferson is well known for writing the Declaration of Independence and a major contributor to the drafting of the U.S. Constitution. Jefferson is also credited with making the real estate deal of all time, the Louisiana Purchase in 1803.

But he is less known for his relationship with the French Dictator Napoleon. Jefferson was the United States Minister to France in May 1785, and subsequently the nation’s first secretary of state under President George Washington from 1790 to 1793. As United States minister to France when revolutionary winds were spinning leading to the storming of the Bastille in 1789, Jefferson became an outspoken supporter of the French Revolution, even allowing his residence to be used as a meeting place for the rebels led by Lafayette.

President John Adams and his party sided with the British triggering the Quasi War with France from 1798 – 1803. But after losing the Haitian Revolution, Napoleon prepared for war with Great Britain.

The Presidential Election of 1800 was one the most divisive in history. Many Federalist accused France of meddling in the 1800 election and some accused Democrat-Republican Thomas Jefferson of being pro French. Thomas Jefferson openly defended the French against the British as the U.S. elites split between the two European Empires. While stories were spread that President “Adams was supposedly maneuvering to have his eldest daughter married into the family of [British King] George III in order to establish a royal bloodline.”

Jefferson defeated Adams in the election of 1800. And in 1803 The Louisiana Purchase was part of a larger treaty Jefferson entered into with Napoleon promising “neutrality” involving any conflict between France and England.

In 1800 Thomas Jefferson could have sided with the British and denied Napoleon the sale and the resources, instead could have launched a third front in the New World against Napoleon. Had Jefferson done so we may have just seized the Louisiana Territory from the French. And BTW the Louisiana Purchase eventually led to the War of 1812 with Great Britain.

Jefferson’s 1800 election as President was as much as victory for Napoleon as it was a defeat for the British. The fact is both Great Britain and France meddled in the U.S. elections of 1800. Napoleon needed to end the war in the New World, sell France’s holds to fund his war in Europe. The fact is all nationals meddle in each other’s internal affairs when their interested are threatened.

Today’s Democrats’ charged that President Trump benefited from Russia meddling in the 2016 U.S. elections overlooking the fact that other nations meddled in 2016 elections to help Hillary Clinton. The Chinese certainly meddled in the US elections and spied in 2016 just as they spied in the 2008 election on John McCain’s campaign, both times to help Obama. The Obama Administration tasked foreign intelligence agencies with spying on then candidate Trump during the 2016 elections. Today Democrats are pretending that they are surprised there’s gambling going on inside casinos.

Only stupid Americans, educated in public schools, would fall for the Dems’ Impeachment of Trump based on foreign government meddling. Grow up. The reality is that every nation on earth violently competes for power and resources and always will. Thomas Jefferson and John Adams both did the bidding of European Empires seeking to leverage their resources to win the election of 1800. Welcome to the real world.