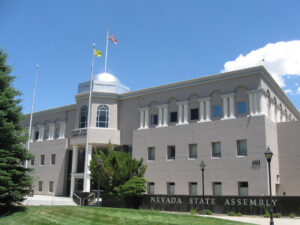 Facing an April 21, 2021 deadline in Federal Court in a lawsuit filed by Sigal Chattah, a candidate for Nevada Attorney General, who sued to open the State Capitol a couple of months ago, Legislative Counsel Bureau Director, Brenda Erdoes now announced she will open the building to folks that are vaccinated.

Erodes is requiring folks to register ahead of time with provide proof of vaccination through an electronic reservation system before a limited number may enter the building.

Citing CV19 as her excuse, Legislative Counsel Bureau Director, Brenda Erdoes, claimed to have the authority to ban Independent reporters, lobbyists and the general public from the legislative building under a vague law that gives the director the authority to “manage” the building. Last year during the special session, Erodes claimed she was just following the Governor’s directives when she banned reporters and the pubic, even as then casinos and strip clubs were open.

Without proof of a vaccine, visitors will be required to take a rapid test prior to entering the building. Thursday April 15, 2020 some two months into the session, the State Capitol will finally begin to open to the public.