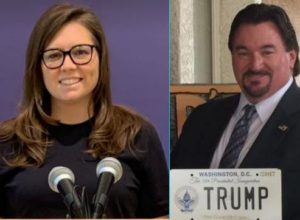 Annie Black is part of the politically connected and powerful Black family in Nevada including lawyer Tisha Black who ran for Clark County Commission.

Annie Black, on the Heidi Harris show, went on attacking McDonald for not supporting candidates like herself when she ran for office in 2010 for Assembly and again when she one in 2018. In her interview, Black also accused McDonald of siphoning off NV GOP Funds for his personal PAC.

On Annie’s website she lists items she would change if elected, including a stronger social media presence and reaching out to Hispanic groups.

McDonald’s supporters fired back noting, according to Nevada State GOP records, Annie Black, candidate for NV GOP Chair, has never attended a NV State GOP meeting. They noted, McDonald and the state party have benefited from McDonald’s close relationship with President Trump who endorsed him for reelection. President Trump was the keynote speaker for the NV GOP in 2016 in Lake Tahoe and made several campaign stops in 2018 for Republican candidates in Nevada, which McDonald takes credit for. McDonald raised over $5 million dollars in 2018, more than any other NV GOP Chairperson ever.

But Black’s supporters point out there was over $1.3 Million left over in the NV GOP’s account in November 2018, money that could have been used to help numerous Assembly candidates who lost by slim margins.

Annie Black has powerful supporters backing her as well as many in the Clark County GOP who are at odds with McDonald. The question is, will the Nevada party leadership buck President Trump’s endorsement and elected an outsider/ insider as NV GOP Chairperson?