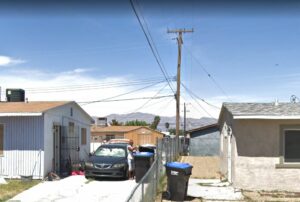 Today, NPR reported “The CEO of Pacific Gas & Electric Corp. told California energy regulators that the state will likely see blackouts for another 10 years like the one imposed last week that left as many as 800,000 customers without power.” Las Vegas could experience a similar mass fire due to high winds and an aging Electrical Grid.

In 2016, at a house in a the poor black neighborhood in Las Vegas, near MLK and Lake Mead, heavy winds broke a power line between the wood pole and the house main power box causing the break box to explode. Fortunately only the break box was fried and a bigger fire did not start. The single family home was owned by an investor who hired an outside electrician to investigate the burnt break box. They discovered a broken NV Energy wire caused the fire. The cost to replace the box was $2,800. But they also discovered that the poles and wiring connecting all the homes in the neighborhood were way beyond their expect service life of 40 plus years. 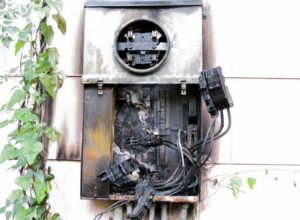 Of Course NV Energy fought the lawsuit offering pennies to settle. But soon they feared that the age of their equipment might spark more lawsuits so they quickly settled the claim for the full amount.

In 2016, solar companies and home owners supported a ballot initiative that would restore Nevada’s retail-rate net metering policy. That same year, NV Energy donated over $2.5 Million to a PAC they set up named “Citizens for Solar and Energy Fairness” with 99% over the money raised coming from NV Energy with the help of Carson City-based attorney James Cavilia filed the PAC designed to oppose net metering ballot initiative. Shortly thereafter, the PAC filed a legal challenge to the pro-solar referendum.

IN 2018, NV Energy spent over $50 million to defeat a ballot initiative that would have allowed competition in to the market place.

Over that last 9 years, NV Energy has donated (according to SOS C&E records) $67,530,209.09 to Nevada politicians to keep rates up, to keep profits up and to keep their expense down. NV Energy gave generously to both Republicans and Democrats. Nevada State Senator Scott Hammond was one the politicians who benefited the most from NV Energy donations along with Michael Roberson and Democrat Shannon Bilbray-Axelrod.

There was an obvious reason why Sen. Hammond received so much NV Energy cash, he sits on the Senate Growth and Infrastructure Committee which was reviewing AB465,

“AN ACT relating to energy; requiring electric utilities to offer an expanded solar access program to certain customers and to submit a plan to the Public Utilities Commission of Nevada for such a program; requiring the Commission to adopt regulations establishing standards for the program; requiring the Commission to approve a plan for an expanded solar access program if certain requirements are met; and providing other matters properly relating thereto”
.
NV Energy is regulated by the Public Utilities Commission of Nevada (PUCN). And their commissioners are appointed by the very politicians who NV Energy has donated some $67 million to over just the past 9 years.
.

Critics say, NV Energy spent an estimated $120 million on political activities over the past 10 years to avoid spending billions of dollars to upgrade their aging power grid system.

In 2004, NV Energy sued land owner Fred Nassiri to allow them to install power lines across his land. The lawsuit went on for 5 years. In the process of fighting NV Energy, Nassiri’s attorneys took numerous depositions and obtained numerous internal documents. The judge eventually ruled in favor of condemnation of Nassiri’s land. But in 2011, the last motion made in the case was to destroy all evidence and depositions.

Clark County Commissioner Tick Segerblom just called for all of Nevada’s power grid to be put under ground.

360 contacted the PUCN and Sen. Hammond for comment. We’ll let you know if or when follow up with us.