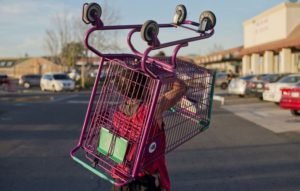 A quick search online shows the average new commercial shopping cart sells for $75. So stealing a shopping cart barely rises to the level of a misdemeanor, and is one cops almost never enforce, especially against homeless folks. But shoppers (especially disabled) at the 99 Cent Store are now extremely impacted by this lack of law and order at the most basic level. Criminal Justice Reform has become Criminal injustice, allowing people to steal without any consequences.

But perhaps if Democrats considered that one shopping cart at the 99 Cent Store generates about $19.80 per day in sales tax, that’s about $7,227 per year in sales tax, they would assign federal Marshals to guard them.

But on the flip side, what punishment should be doled out to Homeless who steal shopping carts? Six Months, a year in County Jail? Hard labor? A fine? A real punishment would be to take away their disability checks. That would get their attention. Should tax payers continue to provide homeless with monthly checks if they steal from the businesses and people providing those checks? Now that’s a Republican response to crime.

Or perhaps we need a free shopping cart for the homeless program? The 99 Cent Store tried to battle this problem when they started requiring shoppers to post a 25 cent bond to use a shopping cart in the hopes that would motivate people to return shopping carts and might reduce theft. But perhaps this may have confused the situation. If a homeless person paid 25 cents to use the shopping cart how long are they entitled to use it? What are the rental terms and conditions?

And then there are folks who get paid around $10 or $15 for every cart the recover and turn back into stores. They drive around town with pick up trucks searching for stolen shopping carts.

Keep in mind the 99 Cent Stores pay millions in taxes in Nevada, employs hundreds of folks in Clark County and provides food and items at an extremely low price helping the working poor who live paycheck to paycheck. One would think police would be eager to help a company which helps fund their department with millions of sales tax dollars every year. But you can’t blame Las Vegas Metro Police when both Republicans and Democrats are pushing “Criminal Justice Reform” and ignoring “Law and Order”. Now crime is out of control in Clark County. It’s so bad that Metro stopped issuing annual reports. If you want a clean safe city, it’s simple, protect the hard working folks and arrest and prosecute thieves.