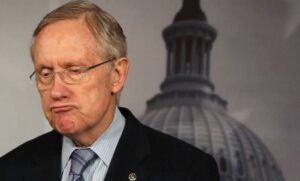 Harry Reid got his major shot in politics as the Chairman of Gaming Commission 1977-1981. A time when mobsters ran Nevada. Gangster Joe Agosto claimed Reid was in his pocket as “Mr. Clean Face.”.

Today, Harry Reid loyalists hold almost ever major post in Nevada. From Clark County Commission, the Attorney general, the State Assembly to the state Senate up to Gov. Sisolak. Democrats didn’t openly challenge each-other in primaries if they wanted a political career in Nevada, especially if that person was endorsed by Harry Reid. Harry Reid used his overwhelming power impose discipline within the ranks and among core donors and elected officials. So to see Henderson Mayor Debra March challenge Sisolak appointed Lt. Burkhead is something completely foreign in Harry Reid’s Nevada Democrat Party.

Ever since Socialist (D) Sen. Bernie Sanders carried Nevada in the 2020 Presidential Primary there’s been a rift in the Democrat Party. Members of the Democrat Socialists followed that victory by taking over the Nevada State Democrat Party last year causing an even deeper divide.

With Harry Reid’s passing last week a power vacuum has opened up in Nevada. Like a huge black hole opening up threatening to swallow the very Earth itself. I cannot emphasis the space Harry Reid filed in Nevada Politics and in the Democrat Party. No one, I mean no one has the stature he had. And no one instills the fear he imposed within his own ranks and among his political opponents.

With that fear and discipline swept away, the Democrat Party’s far left Socialists are about to go full speed at the old guard. And within the old guard chaos is about to rein.

Sig Rogich spoke very highly of Sen. Reid when he described him as

“Stubborn, strong willed and focused on winning. Winning was everything for Senator Reid. Without winning you have nothing. Harry Reid’s shoes will be hard to fill, but over time people will emerge and the party will move forward.”

The Democrat Party is a collection of interest groups that need to be constantly fed government cash to keep a float. Reid delivered when he was in the Senate. And he delivered cash to campaigns he supported giving him his power.  There’s only a few folks with the stature within the Nevada Democrat party to truly govern.

U.S. (D) Senators Catherine Cortez Masto and Jacky Rosen were his hand picked successors in the Senate. And Gov. Steve Sisolak has been a loyal soldier of Reid’s for years. But, according to recent polls, Masto and Sisolak’s days may be numbered as they face a major head wind in this years mid term elections.

Republicans seemed destined to do well in the mid terms if they don’t fatally hurt each other in the numerous hotly contested primary races. Republicans have had an open primary system without any political machine to limit primary races, something under Harry Reid rarely happened. Under Reid there were very few primaries in the Democrat Party giving them a huge edge in the general elections often. In fact, Democrats’ edge was so great running unopposed primaries, that Harry Reid himself spent money in the Republican U.S. Senate Primary in 2010 to help his weakest Republican opponent, Sharron Angle, win the nomination.

Harry Reid’s funeral is set to be held at the Smith Center Jan 8, 2022 at 11 am. President Biden is expected to attend. Just like in the old Soviet Union after a premier died, Reid’s Funeral may actually give us some idea who may be the new leader of the Democrat Party.

Will Republicans be able to capitalize on Democrat’s infighting?