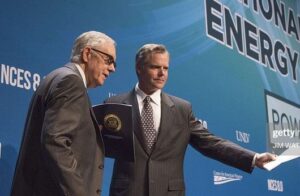 Murren is best known as the MGM CEO who failed to adequately protect his property, the Mandalay Bay, from the Oct 1, 2017 mass shooter, resulting in a $750 million lawsuit settlement a few months ago. Murren replaced armed guards at the Mandalay Bay with unarmed unlicensed security guards to save money. Murren then conspired to cover up his Oct 1 failures by actually suing the victims in Federal court before they sued MGM.

Murren is also famous for implementing the horrendous policy of charging for parking at strip hotel properties. BTW we’ll see if that policy survives after all this.

But Sisolak’s choice of super partisan Murren, calls into question his entire lock down plan and choices of which industries are essential and non-essential. For example, even though the Cannabis Industry (one of Sisolak’s biggest donors) is listed as non-essential now, the entire industry was given a special waiver allowing them to deliver weed starting at 3pm today.

Picking Murren is a signal to his big donors, like the MGM and cannabis industry, that he has their back. The last thing small business owners and their employees want to see is Vegas Political Juicy deciding winners and losers during this Sisolak imposed lock down.