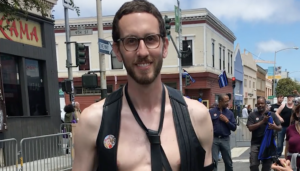 California Sen. Scott Wiener (D-San Francisco) wrote a bill recently that would decriminalize HIV infected people who knowingly expose their sex partners to HIV without their consent or knowledge. So in other words, if an HIV infected gay guy meets another gay guy at a gay bar and they have sex and the infect gay guy doesn’t tell the other gay guy he has AIDS, that would no longer be a felony under Wiener’s bill.

Wiener issued the following statement in support of the bill. “HIV-related stigma is one of our main obstacles to reducing and ultimately eliminating infections. When you criminalize HIV or stigmatize people who have HIV it encourages people not to get tested, to stay in the shadows, not to be open about their status, not to seek treatment.”

“Current state law related to those living with HIV is unfair because it is based on the fear and ignorance of a bygone era,” Gloria said. “With this legislation, California takes an important step to update our laws to reflect the medical advances which no longer make a positive diagnosis equal to a death sentence.”

But Sen. Joel Anderson (R-San Diego) thinks diluted consequences would only encourage people to continue spreading the disease. “Because they are so disrespectful of the people they are willing to engage in a sexual act with and risk their life, that is the reason why they need to go to prison,” he said. “They can’t be trusted in society as a responsible person.”

If liberals really want to protect gay men’s health this law goes in the opposite direction. Instead, California Liberals in the State Legislature want to protect the men who purposely and recklessly are spreading an infectious disease rather the innocent unsuspecting victims.