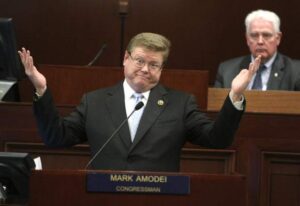 After voting with Nancy Pelosi 65% of the time over his career in Congress, folks shouldn’t be surprised that Nevada Republican Mark Amodei voted for the Critical Race Theory Socialist BS made up holiday “Juneteenth”. Described by Dem News Outlets as supposedly “June 19, 1865, the day enslaved people in Galveston, Texas learned slavery was ended, as a public holiday.”

September 22, 1862 the actual date President Lincoln issued the Emancipation Proclamation seems like a much better date to make a federal holiday. Or June 6th, the date the 13th Amendment passed freeing slaves in America forever.
What’s worse is, Amodei is in one of the most conservative Congressional Districts in the country.

The 14 no votes were all from Republican members of Congress. They include:

“Juneteenth should be commemorated as the expression of the realization of the end of slavery in the United States – and I commend those who worked for its passage,” Roy said in a statement. “I could not vote for this bill, however, because the holiday should not be called ‘Juneteenth National Independence Day’ but rather, ‘Juneteenth National Emancipation [or Freedom or otherwise] Day.’  This name needlessly divides our nation on a matter that should instead bring us together by creating a separate Independence Day based on the color of one’s skin,” he said.