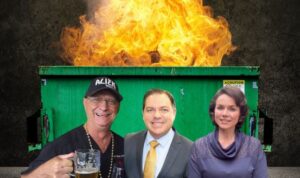 This week, Chuck Muth’s email blast to his followers expressed his support for Independent American Party Candidate for Nevada Secretary of State, Janine Hansen, stealing votes from the Republican nominee, former Assemblyman, Jim Marchant, handing the race to Soros-funded Democrat, Francisco Aguilar. Muth has been in politics for decades, and he knows exactly what he did.

Muth wrote in his blog yesterday.

If we end up with a Soros Democrat controlling our election security for the next 8 years, you can thank Chuck Muth.

Last night, the Clark County Republican Party voted to censure (to condemn) Amy and Danny Tarkanian, Michel Roberson, and Chuck Muth. While most of the crowd knew who Roberson and Tarkanains were, most did not know who Chuck Muth is, so he survived the vote.

BTW Muth held his own “Conservative” event across town at the exact time the Clark County Republicans were voting on condemning him.

Other Republican county central committees are expected to vote to expel Chuck Muth and the Tarkanains and Roberson in the coming weeks. Then the NVGOP will vote as a body to expel them, possibly.