Acting Clark County Republican Party Chairman David Sajdak was arrested, charged and order to appear in court for Soliciting Prostitution, violating section code 201.354, on or about November 03, 2006 in Las Vegas. Sajdak was charged with one count, a misdemeanor. No word on the age of the prostitute Sajdak solicited sex from in the police report.

Today, Sajdak is running to replace Carl Bunce who stepped down last week after failing to raise a single dollar since June 2018. The election to replace Bunce is being held today at 6pm at the Elk Lodge on Charleston Blvd.

Several women we spoke with were deeply concerned about having the Chairman of the Republican Party with an arrest record for soliciting prostitution and the kind of message that would send to women voters at a time when the party is trying to rebuild after a disastrous loss in the 2018 midterm elections in Nevada.

360 spoke with Sajdak today and at first he denied he had even been charged. Then Sajdak said his lawyers were currently working on having the case sealed. Then after pointing out that the criminal charge was on the Las Vegas Justice Court website Sajdak claimed he was a victim of entrapment.

A criminal lawyer 360 spoke with on background called Sajdak incompetent for not having the case sealed before running for office. 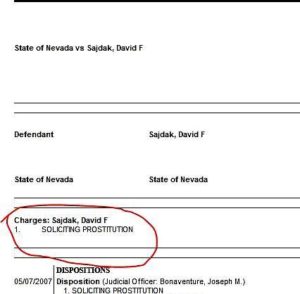 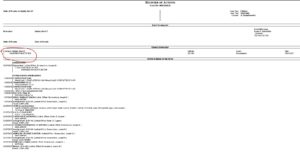