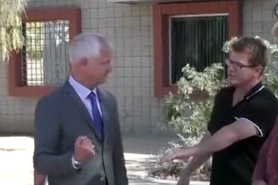 The unrelenting campaign of a City of Las Vegas Councilman attacking a property owner’s right to build on its property, that was hard zoned ‘single family residential’ by the City Council in 2001, continued this past week. The Councilman is Steve Seroka who has said publicly “over my dead body” will development of the property be allowed. The City’s actions, and the disputes among various parties, have resulted in at least 8 different court filings spanning courtrooms within the Clark County District Court, United States District Court and even the Nevada Supreme Court. The litigation is costing Las Vegas taxpayers close to a million dollars in legal fees, and things are only just beginning. If the property owners prevail on their government taking claims, it could cost the taxpayers hundreds of millions of dollars.

Councilman Seroka is using City resources and taxpayer funds as a form of “bailout” for a handful of wealthy and influential homeowners that are unhappy about losing their fairway views in their multi-million homes in the Queensridge neighborhood. The small group of Queensridge elite are opposing the property rights vested to the adjacent land despite their own Queensridge purchase documents and CC&Rs disclosing that the Badlands Golf Course (closed in December 2006) is “not a part” of Queensridge, has no “view” rights, and is “SUBJECT TO DEVELOPMENT”.

Last week, Laborers Union Local 872 and the Latin Chamber of Commerce, provided testimony at City Hall that a newly proposed ordinance sponsored by Councilman Steve Seroka, aimed specifically at the former Badlands Golf Course property, IS COSTING JOBS. Similarly, a recent government affairs report prepared by a prominent real estate development association opined that the ordinance is poorly drafted, legally flawed, changes a process which has worked for more than 20 years, [places] an encumbrance on property which the owner previously held free and clear, and called the ordinance anti-development.

Now in addition to the Las Vegas City Hall and courtroom clashes, the embattled councilman is spreading his rhetoric in the media, locally and across the country. Councilman Seroka is on a media campaign touting a highly unusual 14 page court order signed by Judge Crockett of the Clark County District Court. The City Attorney’s legal opinion on the order is that “there was an error by the court” and in a Staff Report stated the order is “legally improper and thus there exists a legal basis to appeal the matter to the Nevada Supreme Court.” Councilman Seroka has publicly elected to disregard the City Attorney’s legal opinion concerning the order, and the Councilman cites the Crocket order regularly.

He makes no mention of a January 2017 court decision by the Honorable Doug Smith that the “property is developable” and is NOT subject to the terms and restrictions of the Queensridge CC&Rs. The Crocket order is being appealed by the property owner to the Nevada Supreme Court, and has resulted in Judge Crocket being sued in his official capacity for doing a “judicial taking” of the property without payment of just compensation in violation of the United States Constitution, the Nevada Constitution and the Nevada Revised Statutes.

Yohan Lowie, manager of the ownership entity for the property, upon which the Badlands Golf Course was operated under a lease, references a series of comments the Councilman made on a video podcast for Vegas Legal Magazine in June 2018. In the video, Councilman Seroka says that Lowie acquired the property in “48 hours” implying there was no due diligence put into the acquisition and that Lowie made a hasty uninformed purchase. The Councilman makes the comment despite the City’s own records which contradict Seroka’s statement on the podcast. Lowie sets the record straight pointing out, “We spent months working with the City officials and staff to confirm without question that the property was zoned for residential single family development. In fact, on December 30, 2014, months prior to our closing, the City of Las Vegas issued a Zoning Verification Letter stating, “The subject properties are zoned R-PD7 (Residential Planned Development District – 7 Units per Acre.)”

Lowie is calling out Las Vegas City Councilman Steve Seroka for what Lowie characterizes as deliberately misinforming the public. “He is spreading his false narrative in the hopes of saving his political career. The days are approaching when he will have to answer questions under oath with a penalty of perjury,” said Lowie. “Wait until the taxpayers are hit with the bill for the ‘Queensridge bailout’ resulting from the Councilman doing the biddings of his wealthy Queensridge friends and campaign contributors,” concluded Lowie.