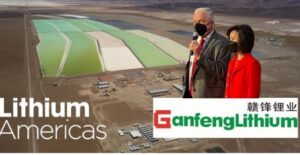 Nevada Governor,(D) Steve Sisolak, is supporting a Canadian company’s, Lithium Americas, plan to build one of the world’s largest lithium mines at Thacker Pass, Nevada. Thacker Pass is situated at the southern end of the McDermitt Caldera, near Winnemucca, in Humboldt County.

The company claims the mine has a 46-year life expectancy with over 3.1 million tons of proven mineral deposits. Lithium is creating the 21st Century gold rush right there in Nevada. Lithium is used to make batteries for electric cars, cell phones, and solar roof panels. Lithium America expects to mine and refine right here in Nevada a third of the world’s lithium. In September, Sisolak approved $8.5 million in Nevada tax dollars to help Lithium Americas. There’s just one problem.

In 2019 , Nevada U.S. Sen. Catherine Cortez Masto, met with the company’s executives and, two years later, lobbied her fellow Senators to oppose legislation that would have imposed royalties on Lithium Americas.

National security experts are gravely concerned that Ganfeng’s influence over Lithium Americas will hand the Chinese Communist Party control over critical U.S. resources, particularly given Ganfeng’s extensive ties to Beijing. Ganfeng president Li Liangbin, for example, holds positions on an array of committees and advisory boards that feed into the Chinese Communist Party, and the company’s 2021 annual report describes board member Yu Jianguo as “a member of the Communist Party of China.” In addition, Ganfeng executive vice president Wang Xiaoshen—who serves on Lithium Americas’s board—”established himself in the lithium sector with China State-Owned Enterprises,” according to a 2011 press release.

China controls 100% of the world’s cobalt, a critical mineral in the production of electric cars. Furthermore, China already controls roughly 60 percent of the world’s lithium resources under Ganfeng’s holdings. With the support of China’s state-owned banks, the company has acquired sizable stakes in lithium mining projects in Chile, Argentina, and Australia. Trump’s Secretary of State, Mike Pompeo sounded the alarm over the Chinese company’s significant stake in Lithium Americas and ties to China’s government.

China would “get a foothold in America on lithium mining. The United States government has a responsibility to look through this façade, this corporate entity that is fronting the Chinese Communist Party, and prevent them from moving forward,” Pompeo told the Washington Free Beacon. “This is clearly an intention by the Chinese Communist Party to control the entire supply chain for green energy. They want a monopoly on lithium, and allowing them to do this by presenting themselves through a Canadian entity is dangerous. The United States Department of Treasury has the capacity to stop this from happening, and they should. “

Within days of Joe Biden being sworn in as President in January 2020, the federal government issued Lithium Americas a mining license.

In April 2022, the company announced its “submission of a formal loan application to the U.S. Department of Energy Advanced Technologies Vehicles Manufacturing Loan Program,” to help fund Lithium Americas’ capital costs for its Nevada mine, which sits on the largest known reserve of lithium in the United States.

And the so-called Inflation Reduction Act, which every federal elected Democrat in Nevada voted for, invests $370 billion in green energy, will benefit Lithium Americas directly by encouraging Chinese investment in U.S. infrastructure. This week, Joe Biden tapped John Podesta to oversee the $370 billion in climate spending, a move that alarms many national security experts, over concerns that Podesta has encouraged Chinese investment in American infrastructure and praise for the top U.S. adversary on climate change.

This follows Sheriff Lombardo and other groups’ TV ads spot lighting Gov. Sisolak and his wife Cathy Ong Sisolak’s shady deals, including a no-bid contract for $250k from the Southern Nevada Water Authority. Cathy Ong Sisolak is a partner at Hobbs, Ong & Associates with ties to Communist China.

To sum it up, American and Nevada tax payers are funding the development of the world’s largest lithium mine located in Nevada, directly benefiting the Communist Chinese government. 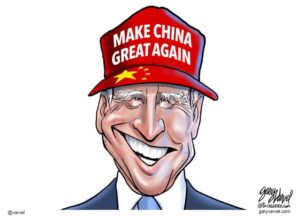