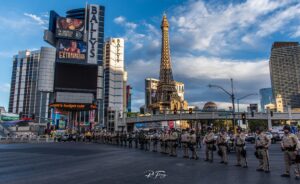 Las Vegas Police Association (LVPPA) Pres. Steve Grammas said, in an interview yesterday with 360 News, he will not be supporting Gov. Sisolak for reelection. LVPPA represents active and retired Las Vegas Metropolitan Police Department (LVMPD) police and corrections officers, and the Las Vegas Deputy City and Municipal Court Marshals. They are the Police Union fighting for law enforcement pay, benefits and rights here in Nevada. So it should be no surprise that the LVPPA has been a significant element in the Democrat Party’s political base for years here in Nevada.

But this year is breaking all the rules and some barriers. On June 4, 2020, Gov. Sisolak released a video, at 5:52; he says “To those who will be out on our streets asking to be seen and asking to be heard, I thank you”. Sisolak thanks the rioters right after acknowledging Officer Shay who was shot in the head by one the rioters. He then went on to call for police to be “patient” with the rioters.

LVPPA put their money where their mouth is and pulled their support from the Nevada State Senate Majority Leader Dem. Nicole Cannizzaro, and produced this spot against her.

But most notably, in yesterday’s interview, LVPPA President Steve Grammas made it very clear that he personally will not be supporting Gov. Sisolak when he comes up for reelection in 2022.

Many of the Republicans running for office I’ve spoken with say the Defund police movement is a critical issue when speaking voters at their doors. Vegas Voters support the police. In fact, according to an internal poll conducted by the LVPPA, over 75% of the community oppose any efforts to Defund The Police and fully support the police.