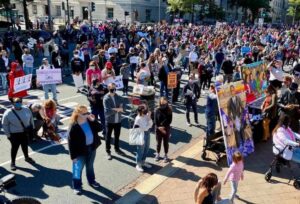 Thousands of vagina hat wearing lefties were out protesting President Trump’s nomination of Judge Amy Barrett to the Supreme court to fill the vacancy created when Ruth Bader Ginsberg passed away a few weeks ago.

This isn’t the first time Dem mayors and governors have ignored their own CV19 rules in favor of a lefty protests. Across the country and here in Las Vegas, BLM and Antifa violent rioters were met with love and support by Sisolak and other lefty Dems. There blatant double standard has been impossible to miss as they continue their CV19 lock downs for the rest of us.