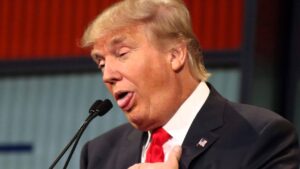 During the entire 2016 Presidential election, Candidate Trump described the “Stupid” trade deals with China made by our national leaders. Trump went on to call trade deals with South Korea and Mexico stupid. Trump was truly surprised by the one-sided deals benefiting our foreign competitors.

Today, we have confirmation that the deals our national leaders made were not made by stupid incompetent lawmakers, but by thoroughly corruption and treasonous scoundrels.

Today, Wannabe President Joe Biden’s son, Hunter Biden, publicly acknowledged he is under federal investigation for his deals with China and other foreign entities related to his tax disclosures.

Today, its been learned that Nancy Pelosi knew about his Chinese Spy issue and still put Swalwell on the Intel Committee.

But the corruption goes even deeper. Lobbyists in Washington D.C. have been taking millions from China for years to influence trade deals. Money that makes its way into Congressional races through PACs and donations made directly to members of Congress.

Trump was wrong, we all were. They weren’t stupid, they were traitors.