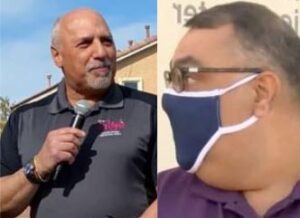 Stavros told 360 News that he is “going through the process” filing a lawsuit in state court and appealing to the Nevada Supreme Court to address the fraud. Stavros’ folks have found voters who are 120 years old. Illegal Aliens voted. Double votes.

Ross Miller somehow overcame a significant vote deficit in the past week to squeak out a ten vote margin of victory. But the Clark County elections Czar, Joe Gloria, admitted yesterday in the Clark County Commission hearing that there was so much voter fraud that they really could not declare a winner.

In an official statement, the Clark County Elections said “This was the only race in #ClarkCounty where the margin was smaller than the number of discrepancies. There was concern among Commissioners and Registrar Joe Gloria related to the outcome, therefore the call for the Special Election.”

According to Clark County Elections Department math, Miller was ahead by 10 votes out of 153,162 votes cast, some admittedly twice. Yep, the Gloria admitted there were folks who voted twice. Gloria went on to admit there were 139 fraudulent votes in the Commission election between Ross Miller and Stavros Anthony. Mind you, Gloria doesn’t have anyone actually investigating voter fraud.