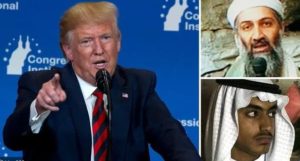 Less than a week after the nation remembered 911 and the victims of radical Islam that killed over 3,000 Americans in a brazen attack on our own soil, sparking a worldwide conflict that’s lasted now some 18 years. At the end of the day there’s only two ways wars end, one side dies or one side surrenders. Today the U.S. under President Trump is closer to winning after killing Osama Bin Laden’s son and heir to the thrown of Al Qaeda.

White House said in a statement:

“Hamza bin Laden was killed in an operation in the Afghanistan-Pakistan region. His death will not only deprive al Qaeda of important leadership skills and the symbolic connection to his father, but undermines important operational activities of the group,” the statement said. He “was responsible for planning and dealing with various terrorist groups,” it added.

Bin Laden had 20 wives and 24 children according to reports.