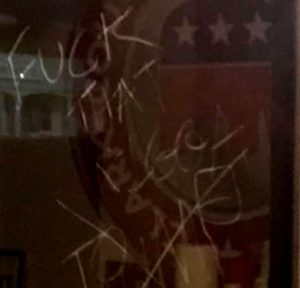 Las Vegas, NV, The offices of the Clark County Republican Party was attacked with violent hate speech overnight according to pictures provided by Chris Dyer, a local electrician. The window of the Clark County Republican Offices was keyed with violent hate speech “F#ck that  (the “N” word) Trump”. Dyer noticed the vandalism around 1:30am this morning.

Dyer reported “ I noticed the door was scratched up and went in for a closer look.”

Note the word Trump is crossed out. That is a threat used by gangs to signal that person for death.

No word on whether the police or Secret Service are investigating yet. The Clark County Chairman David Sajdak “Sadjak” has refused to comment on the violent hate speech attack. Sadjak was recently accused of being a Never Trumper after retweeting disparaging remarks about the President, which has sparked a recall movement against him this Tuesday Sept 17 at the Silverton Casino.

The CCRP should leave the vandalism just as it is through the election next year so everyone can see who Democrats really are, violent thugs. 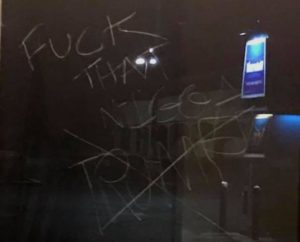 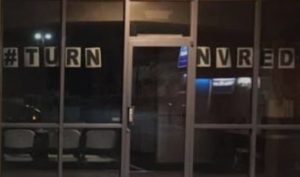