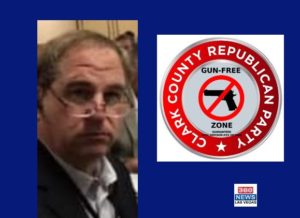 Clark County Republican Chairman David Sajdak sent out an email blast to members this weekend demanding that Republicans disarm before attending this Tuesday’s meeting. This isn’t the first time Sajdak has caused an uproar. Last week Sajdak was accused by numerous Republicans of being a Never Trumper after he retweeted a slur calling President Trump “The Orange”.

The email sent out (see below) says “In an effort to make our meetings more productive we are implementing new protocols. These have been designed by our new Sergeant at Arms (SAA) team who are a group of professionals in the field of safety and security. Based on feedback from our members these rules are to improve our meeting productivity in a more professional business setting.”

The email goes on to state “For the safety of everyone, please leave your backpacks/large purses in the car. Guns are not permitted inside the Silverton.”

Many Republican members are demanding that they change venues now and move to somewhere that supports the 2nd Amendment.
This may explain why Sajdak refused to support the Gun Grab Lawsuit, even after every sheriff in the State of Nevada opposed the new gun control laws passed by the Democrat Controlled Nevada Legislature earlier this year.

Sajdak said nothing in the email blast about the violent hate speech attack on the CCRP offices this week. 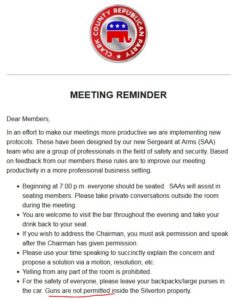