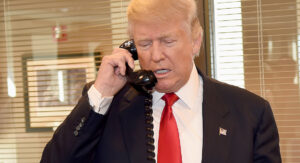 Over the last few weeks the Trump administration has targeted violent anarchists with arrest and serious criminal charges, many now facing life in prison.

On May 31, 2020, a video located by LVMPD investigators captured the events. The video begins as an individual, later identified by law enforcement through social media photos and accounts as defendant Ricardo Densmore, recording the incident, approached two males, later identified by law enforcement through social media photos and accounts as defendants Tyree Walker and Devarian Haynes. As Walker poured a liquid from the red gas can onto a white object, the defendants can be heard discussing pouring the liquid directly on the patrol vehicles. Walker approached one of the patrol vehicles but quickly moved to the patrol vehicle parked directly behind the first vehicle, where he was joined by Haynes carrying the gas can. Through a broken or missing front passenger side window, Walker ignited the white object using a butane lighter. Walker stood immediately adjacent while Haynes poured liquid from the gas can through the broken or missing window into the vehicle. As the fire ignited, the sound of a siren from an approaching LVMPD vehicle can be heard on the video. Walker dropped the unknown white object, which was on fire, into the patrol vehicle. Haynes dropped the gas can inside the patrol vehicle. The defendants fled on foot as the video immediately ends. Agitators who are using the camouflage of lawful protests to commit violence against law enforcement will be prosecuted,” Trutanich said. “Violence places protesters, first responders, and bystanders in danger, and steals focus away from the messages that peaceful protesters are striving to deliver.”

In Oakland, where Federal Officer David Underwood was murdered:

At a press conference held this morning at the Ronald V. Dellums Federal Building and U.S. Courthouse in Oakland, California, the Department of Justice announced that murder and attempted murder charges have been filed against Steven Carrillo, the alleged gunman in the May 29, 2020, drive-by shooting that resulted in the death of Protective Security Officer David Patrick Underwood and injuries to a second security officer. The Department of Justice also announced aiding and abetting charges against Robert Alvin Justus Jr., the driver of the vehicle from which Carrillo is alleged to have attacked the guards.

“Liberty flourishes in the rule of law,” said Assistant Attorney General for National Security John C. Demers.  “Indiscriminate targeting of law enforcement officers by those motivated by violent extremism of any stripe is contrary to our nation’s values and undermines the powerful message of peaceful protestors.  The Department of Justice stands in support of all Americans exercising their First Amendment rights to peaceable assembly and speech but we stand firmly against anyone who seeks to hijack the protests with acts of violence and destruction.”

According to the allegations in the complaint, on the night of May 28, 2020, the Minneapolis Police Department’s Third Precinct was overrun and heavily damaged due to vandalism and arson.  Investigators with the Bureau of Alcohol, Tobacco, Firearms and Explosives (ATF) identified multiple separate fires had been started in the building.  Investigators were able to identify Williams in surveillance video footage from the Third Precinct.  Williams, wearing a mask, a baseball cap, and a hooded sweatshirt, can be seen in the video standing near the entrance of the Third Precinct holding a Molotov cocktail while other individuals attempt to light the wick.

The defendant is currently in federal custody and had her initial appearance in federal court yesterday.  The government will be filing a motion for the defendant to be detained pending trial.

Following peaceful protests in the early afternoon of May 30, 2020, in response to the killing of George Floyd in Minneapolis, Minnesota, civil unrest began to unfold later that afternoon in Philadelphia that resulted in widespread looting, burglary, arson, destruction of property, and other violent acts.

On that day, two vehicles, one PPD sedan (number 2514) and one PPD sport utility vehicle (number 1612), were parked on the north side of City Hall in Philadelphia.  During the violent episodes that began around City Hall that afternoon, Blumenthal allegedly set fire to both vehicles.  According to the complaint, various videos taken at the scene captured the defendant wearing protective goggles and gloves, taking a flaming piece of wooden police barricade from the rear window of the PPD sedan that was already on fire, and then shoving the flaming wood into the PPD SUV that was not on fire.  Within minutes, the PPD SUV was also completely engulfed in flames.  As a result of the fires, both PPD vehicles were destroyed.

“We at the U.S. Attorney’s Office fully support the First Amendment right of the people to assemble peaceably and to petition their government.  But torching a police car has nothing to do with peaceful protest or any legitimate message.  It is a violent and despicable act that will be prosecuted in this district to the fullest extent of the law,” said U.S. Attorney McSwain.  “Anybody who engaged in such acts can stand by to put your hands behind your back and head to federal prison.  We are coming for you.”