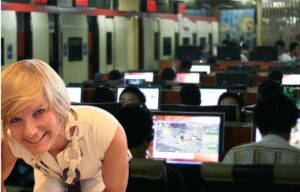 In 2016, Democrats accused the Russians of spreading misinformation about Hillary Clinton (actually the truth they were spreading about her) interfering in the election to help get Pres. Trump elected. They use trolls on FB and Twitter control the message and convince all of your folks to vote for Trump instead of Hillary. Now Dems like Susie Lee are doing the same thing as Russia. We recently learned, thanks to Elon Musk, that half of Biden’s 44 million Twitter followers are fake accounts. Nothing to see folks.

“Troll” is actually an internet slang referring to a person who purposely tries to create discord or distract others by posting off-topic comments online. Most of the “trolls” around the world “trolled” others just for their own amusement. But has it ever occurred to you that there might be a group of people who get paid to “troll” on the internet?

My name is Alison and I’m a Digital Relational Organizer at People First. I am reaching out to share a paid content partnership with creators.

We would love your help to Get Out the Vote in Nevada! We’re looking for creators in Nevada to show support for congressional candidate Susie Lee (NV-03) and combat misinformation.

If you’d be interested in helping us in this GOTV effort, please let me know. We’re offering payment to those willing to make one social media post or video.

Feel free to respond via email with any questions, or by filling out the form below.” 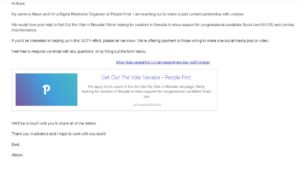 What caught our eyes was the phrase “show support for congressional candidate Susie Lee (NV-03) and combat misinformation.”.

Have you ever wondered who is attacking you on social media because you criticized a leftist news outlet or a Democratic politician?It turns out Dems are paying an army of trolls on social media to attack you if you say anything against their people or policies.

According to Axios, Democrats are paying troll farms in third-world countries.

Professional political trolling is still a thriving underground industry around the world, despite crackdowns from the biggest tech firms.

Why does it matter? Coordinated online disinformation efforts offer governments and political actors a fast, cheap way to get under rivals’ skin. They also offer a paycheck to people who are eager for work, typically in developing countries.

Driving the news: Facebook last week said it had uncovered a massive troll farm in Albania, linked to an Iranian militant group.

360 News reached out to Susie Lee’s public information officer for comment. Nothing yet. 360 News scoured Lee’s FEC campaign spending reports and there was no record of this company receiving money from Lee.