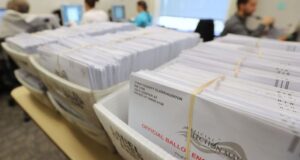 After 711 lady, Nevada Sec of State Barbara Cegavske screwed President Trump over by turning the Nevada election into an all mail-in-ballot election full of fraud, now we’re learning many Republicans simple never received their mail in ballots. And before start asking for my sources, I actually the made the effort to insure I was properly registered in late March and even received a voter verification card in the mail. But I never ever received a mail in ballot. I literally had to go to the elections department and ask for one to be provided to me.

What’s even more troubling is that the voter’s party affiliation is marked on the outside of the envelope creating the opportunity for voter fraud by anyone who comes in contact with mail in ballots.

Nevada Watch, is calling for an investigation filing a formal complaint into how many registered voters did not receive their ballots and a demand to remove party affiliation from the outside of mail in ballots.