SISOLAK’S UNCONSTITUTIONAL RENT FREEZE, BEING GENEROUS WITH OTHER FOLKS’ $$ 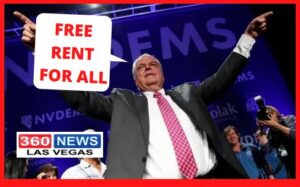 The government has no right to interfere with adults who enter into legally binding contracts with landlords to rent houses or apartments. Seems like a simple concept. But Governor Sisolak just issued another Unconstitutional Emergency order freezing evictions for 30 days in Nevada. Besides his outrageous ban on the anti-malaria drug, this may be the single biggest attack on civil liberties and private property in the history of our state. Being compassionate with other folks’ money is still theft.

Here are the questions the Governor failed to answer when he issued his edict.

Why do people who still have their jobs get to skip rent for three months?

Why do people who get government checks get to skip their rent for three months?

Will the State of Nevada compensate landlords for lost rent during those three months when folks default in June?

Can landlords report the rent default to credit reporting companies?

Can landlords evict tenants for nonpayment in May for April and May’s rent?

Are landlords still required to maintain their properties during the three months?

So a billionaire who is renting a penthouse can skip paying rent for the next 3 months?

Can Sisolak issue another 30 days in May out of compassion?

Using government force to freeze rental payments will end in a disaster when folks don’t have two months rent to pay come June 1, nor two months utility bills nor two months car payments. Many of those folks the governor is playing to will end up being evicted and then will have to pay through the nose to rent another place or end up homeless. Many of those folks will simply default and open the state up to millions in lawsuits. Many landlords actually live rent payment to rent payment. Most landlords are real estate rich and cash poor. And it’s not going to be only three months lost rent. Come June when these folks can’t pay, landlords will have to pay lawyers, go through a back lodged court system for at least a couple more months, rehab the unit, then try and rent it out again. In reality landlords are facing at least 6 months of lost revenue, legal bills and rehab costs. There is absolutely zero legal justification for this economic carnage. Gov. Sisolak is not providing any rental funds to landlords who don’t evict folks. That’s called theft. Landlords don’t owe you anything unless you pay your rent. What the governor can do is speed up unemployment checks to those who need to pay their rent now. That’s the only lawful actions he can take. But this is exactly what all the little Bernie Sanders commies in Nevada want. Rich verse poor driven anarchy.

Not only is the governor’s suspension of rent unconstitutional in itself, he’s potentially creating billions of dollars in liable for the state of Nevada from landlords’ lawsuits for the state without the legislators’ approval. In essence spending money without their approval.