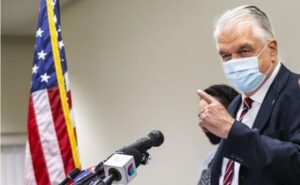 At least we’re not last anymore. For most of 2021 Nevada was dead last with the highest unemployment in the nation. Today we’re 49th with New Mexico at 50th, according to the latest U.S. Bureau of Labor Statistics report. Nevada has more economic opportunity than many of the states in the nation. Our neighbor, Utah, came in at 3rd with an unemployment rate of 2% compared to Nevada’s 4.7%. Our other neighbor, Arizona, ranked at 25th with an unemployment rate of 3.3%. Even commie land California came in at 41st with a rate of 4.7%.

Inflation and gas prices are so bad in Nevada, more Nevada families than ever are being forced to rely on local food banks for groceries. With prices up 9.1% since last year, inflation hit a four-decade high in June, while core consumer prices rose by 5.9%.

Steve Sisolak continues to brag about his abysmal economic record. Today, Sisolak boasted that Nevada has recovered “100% of all jobs lost during the pandemic.”

So why the difference between Utah and Nevada? Utah reopened their business within months. Sisolak’s policies and pay to play corruption have hurt our economy.

The Pandemic was very good for Gov. Sisolak’s bottom line as he raised millions for his reelection campaign in 2020. According to the Nevada Secretary of State’s C&E reports, Gov. Sisolak raised over $2.4 million in 2020. That’s a million more than he raised in 2019. Businesses desperate for CV19 relief, like casinos, gave tons of cash to the Governor in 2020.

Sisolak shut down small businesses labeling them “non-essential” while letting big corporate stores like Walmart remain open destroyed business confidence. Democrats have a grip on economic activists with super high regulations that the average person cannot afford to penetrate to start a new business without paying lawyers to help navigate.

Most small businesses need a special use permit which can take 6 plus months and cost $10K in legal bills before you can open the doors.

Who wants to take a chance right now and start a new business if next week, next month or next year Sisolak can shut you down without notice?

Who wants to buy a rental property in Nevada when Sisolak can endlessly extend eviction moratoriums and bankrupt you?

Who wants to start a new business with radical Socialist Democrats running the state legislature promising to tax and regulate you to death?

And what Sisolak’s DERT’s fails to provide in their monthly jobs report is:

Who is employing folks today.
Large companies like Walmart or small businesses?
And who is taking these jobs? How many of them are the same folks thrown into unemployment?
How many active small businesses are there in Nevada today verse before the pandemic?

Then there is the new AB5 law out of California that just banned Independent Contractors. That means that if you want to work for yourself as a self-employed small business you can’t. It’s illegal. That is at the heart of true Communism. No exaggeration. And Nevada Dems want to do the same here.

Let’s be clear. Sisolak and the Dems stand by everything they did during CV and would do it all again.

Nevada is starting to see their most productive folks moving to Texas and other red states fed up with Sisolak’s regime’s economic uncertainty. Businesses need certainty and consistent policies to succeed. Nevada is one legislative session away from becoming California and losing our economic freedom.