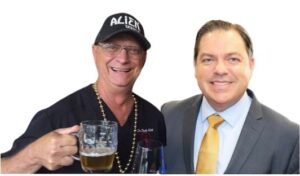 There’s an old saying in politics “An honest politician is one that stays bought”.

Six years ago seems like an eternity in Nevada Politics. So many newcomers to Nevada politics who don’t know about the civil war within the Nevada Republican Party started by RINO’s Gov. Brian Sandoval and State Senator Michael Roberson in 2015. In 2015, Republicans won every Constitutional office in the state. They won both houses of the Nevada State legislature on a promise not to raise taxes and then promptly broke that promise within weeks of winning the 2014 mid-term elections.  Sandoval and Roberson led the effort to pass the Commerce tax that created the first gross income tax in the Nevada. But that wasn’t all. They passed Senate Bill 303, which gave driver’s licenses to illegal aliens and made us a sanctuary state.

These laws triggered a civil war within the Republican Party that destroyed our party giving the Dems the power they hold today. Conservative leaders like Assemblyman Brent Jones pushed back and led an effort to run real conservatives against every RINO in the state in 2016.

A major outspoken critic of Roberson at the time was Chuck Muth. 2015 through 2017 Muth relentlessly attacked Roberson for the Commerce tax coining the name “Tax Hike Mike”. During that same time, Muth took money from Jones to support his Blog and to help Jones with the Republican civil war.

Brent Jones not Roberson, was the first Republican elected official in Nevada to openly support and endorse Trump for President in 2016. Not sure if Roberson ever came around to supporting Trump. Muth also refused to support Trump in 2016. BTW Roberson is now a lobbyist for the Democrat dominated Clark County Teachers’ Union.

“Not only was Tax Hike Mike’s Lt Governor’s loss another embarrassing failure, but many, including me, believe his spot on the ballot as GOP gubernatorial candidate Adam Laxalt’s running mate helped cost Laxalt the election against Democrat Steve Sisolak.”

According to numerous sources, Muth took money directly or indirectly from Roberson to go neutral in the race. For Roberson to neutralize a major conservative critic was a huge political victory which helped him win the nomination.

So we have Chuck “You” Muth to thank for giving us Gov. Sisolak. “An honest politician is one that stays bought”.