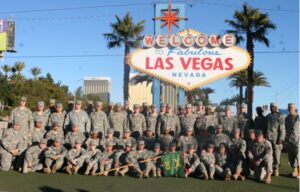 In 2001, the U.S. Army Military Police Reserve Detachment was assigned to Las Vegas, Nevada. Since then the MP unit have provided security to the city through good times and bad. The MP unit have been activated numerous times here at home and overseas since 2001 including providing security on the Las Vegas Strip in the past for special events. “We are a law and order detachment,” said 1st Lt. Anthony Perkins, executive officer with 313th MPD.

This week, as news of looting and violence grip major cities, and, after two nights of violence here in Las Vegas where some 25 officers have already been injured, Gov. Sisolak refused to call up the Las Vegas Military Police Reserve units, clearly out of spike against President Trump. Yesterday Pres. Trump called on the national’s governors to call up military reserve units and put down the violence. But what seems like a pattern now, Gov. Sisolak refused to call up the reserves and now a LVMPD officer has been shot in the head by a sniper.

Police are not soldiers. They are here to provide peace time law enforcement, including crime protection. When there’s civil unrest, like we saw over the past few days, the National Guard and Army Reserve Units are needed to show force to prevent more escalating violence like we saw last night. Watching other cities across the country looted and burned to the ground was proof enough for anyone that Las Vegas needed the National Guard to provide support to local law enforcement last night. Police in Las Vegas said Monday that 338 people were arrested during three nights of protests.

But this isn’t the first time Gov, Sisolak has purposefully gone against Pres. Trump resulting in bad outcomes. Gov. Sisolak ordered and still to these day maintains a ban on Doctors prescribing hydroxychloroquine, all because Pres. Trump said good things about the drug. Over 340 Nevadans have died from CV19 while Utah, who embarrassed hydroxychloroquine from day one of the CV19 crisis, has seen only about 50 deaths.

Gov. Steve Sisolak tweeted “My Office has been notified that the Las Vegas Metropolitan Police Department is currently working two separate incidents in Las Vegas. The State is in contact with local law enforcement and continues to monitor the situation.”

Now Sisolak’s refusal to call up the Las Vegas Military Police has resulted in the shooting of a Las Vegas Police officer and more violence across the city. And Sisolak is still refusing to call them up. The blood a LVMPD officer is on his hands now.