The highlights according to Homeless Shelter CARES residents Paul spoke with undercover inside the homeless shelter:

“The Nevada Cares Campus emergency shelter is a Washoe County program serviced by a contract operator, Volunteers of America (VOA). The contracted operator is responsible for the day-to-day operations and responsible for hiring staff.”

360 News called the number listed in the Washoe County Website and no one would answer questions about the facility. But they did say they have beds available today. We called their corporate offices and so far no response. 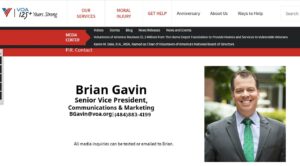 No video or photos were taken inside the shelter out of respect for those living there.

I recently contacted the Washoe County Government regarding their homeless facilities. I requested a public tour of their brand new 46,000 square-foot, 900 resident-capacity homeless tent off of 4th Street, known as the “CARES Campus.” My request seemed reasonable. After all, this homeless shelter has been open for over a year. CARES opened May 2021. 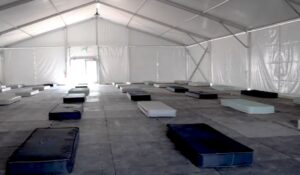 I was told, “No.” The explanation given?  “The homeless shelter hasn’t been open very long, and we haven’t gotten around to setting up public tours yet; but we plan to offer them sometime in the future.”

The County’s response didn’t ring true.  One year+ wasn’t enough time to let the public see, firsthand, a facility that is part of a $75 MILLION expenditure that was proclaimed “incredibly great” by local politicians and Governor Sisolak when it opened? It seems that Reno Mayor Hillary Schieve et al. would have been begging the public to come see the great job the local government claims to have done in solving Washoe County’s homeless problem.

Sensing that the County might have another reason for not offering public tours, I contacted two friends of mine who are/have been residents at this new tent shelter. They eagerly arranged for me to come inside the facility, where I got to see the entire operation and interview other residents.  What follows is what I saw and/or heard inside the CARES Campus facility.

City/County Claim: The tent shelter maintains security with a metal detector/security checkpoint, so all residents can feel safer and more secure.

What I Observed: The lackadaisical security search I received could possibly have detected a machete or an AR-15, but it certainly would have allowed unlimited amounts of other lethal weapons, drugs, and alcohol to be brought-in.

Clients’ Comments: “There are all kinds of weapons in here, and drugs and alcohol are used by almost everyone. Five people died in here in the last few weeks on overdoses of fentanyl they bought from the staff.”

• City/County Claim: The tent shelter will provide a safe place for those experiencing homelessness.

What I Observed: Two staff sat at a table, well over 100 feet away from over 500 tightly-packed bunk beds in 2 different rooms, identical to prison dorms. ANY activity could have been going on in the far reaches of the dorm, and staff members would never have seen it.

Client Statements: “This place is more dangerous than prisons I’ve been in. Three different gangs have a presence here. Extortion, theft, robberies, and beatings happen all the time. You don’t want to know what goes on in the beds. Sleeping on the street is much safer than this place. The staff makes many 911 calls every day to stop serious incidents.”

HELPING PEOPLE OUT OF HOMELESSNESS?

• City/County Claim: The tent shelter will be strictly temporary, transitional housing, where clients will receive counseling and wrap-around services to get their lives together, find jobs and housing, and move on.

What I Observed: Dozens of young men were sleeping in their beds in the middle of the day. No classes or tutoring were being provided in the huge, empty dining room.  No social workers or counselors were visible anywhere, and their offices were closed. A handful of older residents were shuffling zombie-like to-and-from the shower/bathroom/laundry area.

Client Statements: “This isn’t transitional! You’d come here to die. Why would addicts LEAVE this place, and almost everyone here IS an addict? They give you 3 free meals. You don’t have to work. You can stay in your bed and drink, use drugs, and do nothing all day for as long as you like, and they can’t really kick you out.  The social workers and counselors are never around. This program is not helping ANYONE get out of homelessness.”

City/County Claim: The tent shelter is almost always at capacity, with no available beds.

What I Observed: We were offered two empty beds by a staff member as soon as we entered the security checkpoint, and were told that beds are almost always available.

Client Statements: “The shelter is almost never full; there are always empty beds.  Lots of people keep beds reserved but don’t sleep in them because it gives them easier access to the campus.”

(The County’s lying about the shelter’s no-vacancy status is intentional. It provides the County a way to exploit the landmark “Boise v. Martin” ruling, which forbids law enforcement from arresting illegally camped homeless individuals IF the city does not have available shelter beds.)

The new homeless tent shelter is a lot of things.

• It’s a very expensive and outwardly impressive structure: $17M to build and millions of dollars more annually to maintain.

• It creates numerous jobs for government bureaucrats, and enriches private contractors, non-profit foundations, and others who make a living off the Homeless Industrial Complex.

• It gives local politicians the opportunity to brag about what they’re doing to help the homeless.

But most importantly for Washoe County tax-payers to know: the new homeless tent shelter is accomplishing nothing that it claims. It does far more harm than good for the chronically homeless AND our communities, and will greatly increase the relocation of homeless individuals TO Reno/Sparks. The  shelter is just the largest and newest waste of tax dollars,  is unsustainable on every level, and is producing the same no-results as all our other city/county-run homeless programs.

And why IS that?

Because the homeless tent shelter was built with federal funding. For that reason, it is forced to operate as a “housing first/low-barrier/’wet-house'” facility. That means that Washoe County (and any other local government that accepts federal funding for the homeless) can NOT require that clients be drug/alcohol free – can NOT force them to get jobs or mental health care, and can NOT remove clients for bad behavior unless it is life-endangering.

In other words, because they accept federal funding, Washoe County is not allowed to have ANY of the components in their homeless programs that are requisite if you have ANY hope of changing the lives of the chronically homeless.

And that fact makes the SOLUTION to our out-of-control homeless problem quite simple.

1) Stop taking the federal grants and fund our homeless programs locally for far less than is presently being spent.

2) This will allow Washoe County to REQUIRE the components that make a homeless program successful: no drugs/alcohol, employment, mental health services (if needed), education/Values/Life Plan counseling, and law-abiding behavior.

3) Homeless individuals who wanted to participate in Washoe County homeless programs would then be required to make the lifestyle changes that are the cause of their chronic homelessness.

4) Those who made those changes would soon become productive members of our community, and our homeless population would rapidly decrease.

5) What about those homeless individuals (more accurately described as vagrants-by-choice) who did NOT want to address the real causes of their problems? They would not be allowed into our programs. They would have to deal with firm, fair law enforcement regarding the countless laws they break on a daily basis, and would soon decide to relocate to communities where no personal accountability is required.