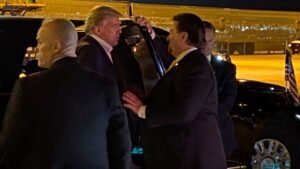 Gov. Sisolak went on CNN to complaint that Pres. Trump isn’t helping Nevada. Sisolak is actually surprised that Trump isn’t taking his calls after repeatedly attacking the President? Sisolak has played politics with the outbreak since the beginning. The clearest example of Sisolak playing politics was tapping Dem Super donor Jim Murren to lead the Corona Virus Task force.

But the smart move would have been to tap Nevada GOP Chairman Michael McDonald who has an extremely strong relationship with the President. And some bipartisanship would have certainly provided more credibility and insulated him from accusations of picking winners and losers for political reasons.

Other folks Sisolak should have invited to help are Former Sen. Heller and Rep Assemblywoman Minority Leader and Family Doctor Robin Titus. Sisolak is actually a very smart and cunning politician. If the Governor really wants to get things done for Nevada he needs Michael McDonald, the guy with the White House on speed dial.