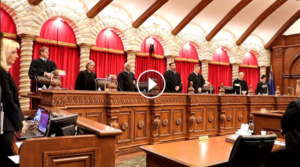 The case started back in 2015 when North Las Vegas Catherine Ramsey was accused of misappropriating money. Members of the North Las Vegas community started a recall petition to recall the judge as allowed under the Nevada State Constitution. The State Constitution allows voters to recall any elected official by obtaining the required number of signatures. The group seeking to recall Judge Ramsey succeeded in gathering the proper number of signatures and they were certified by the Secretary of State and elections clerk. But then Judge Ramsey sued to block the recall election, an election that seemed destined to succeed. It was well funded by powerful people in our community.

Ramsey argued that since the State Legislature created the Nevada State Commission on Judicial Discipline, the State Constitutional provision allowing voters to recall a Judge they elected, was null void.

The vote was 4-2 with Justice Lidia Stiglich recusing herself from the case. They all should have recused themselves and left the issue to the voters and legislature to workout.

Justices Kris Pickering and Michael Douglas dissented, arguing the 1912 language in the state constitution plainly states “every public officer in the state of Nevada is subject, as herein provided, to recall by the registered voters.” They argued the fact they’re also subject to discipline and even removal by the commission doesn’t exempt them from voter recall.

But the Majority decided not to recuse themselves from this obvious conflict of interest. The State Supreme Court Justices themselves are elected and subject to recall. Their ruling is obvious job security.

“We, like our sister states, believe that judges are public officers for purposes of Nevada’s constitutional recall provision adopted in 1912,” the opinion by Justice Jim Hardesty states. “However, even if judges originally could be recalled, (Judge Catherine) Ramsey argues that the creation of the (Judicial Discipline) Commission in 1976 superseded any such recall authority over judges.

The judicial commission was created by amendment into the Nevada Constitution by the Legislature and voters in 1976 amid concerns Nevada judges weren’t being held to uniform and consistent standards. The goal was to promote that consistency, independence and political neutrality while allowing the public to hold judges accountable for their official conduct.

This decision by the State Supreme Court was a colossal power grab. But as I’ve said for years, “Nevada” is Latin for “Conflict of Interest.”