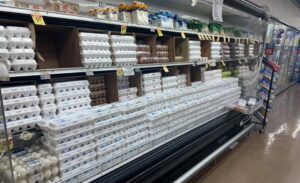 Two weeks ago, grocery stores were slammed by desperate people preparing for the zombie apocalypse, and today they are fully restocked (except toilet paper, you freaks) all due to the free market, private businesses are stepping up. The government didn’t produce a single egg, a single loaf of bread or a single can of tuna. It was thousands of businesses, working overtime, because they are making huge profits right now. That dirty word Dems hate, Profit.

The Profit Motive is proving once again to be the savior of the American people even as government continues to screw things up. I have a friend who owns a food business. Since the pandemic hit, he went from one shift per day to now three shifts per day running 24/7, which means he’s hiring lots of folks. He’s doing it because he’s making more money now than at any time in the past. He cannot produce enough product to fill the demand. Free people willing and able to purchase a product creating demand that businesses compete to fill the fastest at the most competitive price.

Ask yourself this question, what is Bernie Sanders producing today, right now to help feed people? Nothing. What is government producing right now besides debt and inflation by printing cash? Nothing.

Other countries are who are lacking basic needs today, are the countries lacking free markets.

Government healthcare systems are failing throughout the world, except Germany; maybe they really should run the world. haha. The CDC receives over $11 Billion a year in tax dollars, yet it was completely unprepared. The CDC was so unprepared that it needed billion more in emergency funding from Congress. FEMA wasn’t ready. The military or HHS were not prepared to handle this. Government completely failed. It doesn’t matter who’s running the government. Government institutions never real work without extreme outside forces pressing them to. These are the same folks in Government who claim to know best and demand power to regulate businesses.

The only thing governments can do in a crisis is spend lots of money, but even in the middle of this pandemic those in government are hiding pork in emergency aid bills instead of actually conserving capital for the long fight ahead.

Our profit driven pharmaceutical companies are racing to produce test kits, vaccines and drugs to save millions and yes to make a profit. Their profit motive has already produced a new quick testing system this week. The company who produces the anti-malaria drugs the fastest will be rewarded with huge profits. The company who finds a cure will earn Billions.

The same holds true for landlords and tenants right now. Government interference will forever alter the industry in ways most cannot imagine. Landlords may require larger deposits to protect themselves against eviction freezes in the future especially from folks who work on the strip. The eviction freeze could trigger a freeze in big real estate companies investing in Nevada pushing rents higher. California and New York are great examples of government intervention that ended badly for both landlords and renters.

The free market is saving America once again. Government just needs to get out of their way.