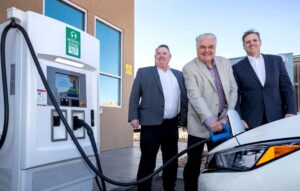 The gas automobile has been the single biggest driver of wealth and economic freedom in the history of mankind. The Degrowth Democrats want to destroy it, of course. Climate change is a scam. The climate has been changing forever, not just in the last 20 years. The temperature on Earth was much warmer than it is today when The Vikings had farms. Yes, Greenland used to be Green. Our own government admits it in a 2017 article in the Smithsonian magazine titled

Why Did Greenland’s Vikings Vanish?

“They (the Vikings) discovered Greenland during a time known as the Medieval Warm Period, which lasted from about 900 to 1300 AD. Sea ice decreased during those centuries, so sailing from Scandinavia to Greenland became less hazardous. Longer growing seasons made it feasible to graze cattle, sheep and goats in the meadows along sheltered fjords on Greenland’s southwest coast. In short, the Vikings simply transplanted their medieval European lifestyle to an uninhabited new land, theirs for the taking.”

In 1400 AD, the greatest challenge (for the Vikings) —and the coup de grâce—came when the climate began to cool, triggered by an event on the far side of the world.”

This demonstrates the fraud that is Climate Science, as promoted by Democrats today. The temperatures on Earth have radically warmed and cooled over the last 1,000 years without gas-powered cars.

In the 2020 Nevada Legislative session, Democrats tried to pass a bill to ban natural gas stoves and ovens in Nevada. Sisolak vetoed the bill after utilities companies lobbied (paid him off). Last week, California unelected bureaucrats on the California Air Quality Resource Board announced they would ban all new gas car sales in California starting in 2035.

“The transportation sector is currently Nevada’s greatest source of GHG emissions. A two-pronged approach to reduce transportation demand, particularly in urban areas, while significantly increasing the percentage of low- and zero-emissions vehicles on Nevada roads can dramatically reduce transportation-related GHG emissions while advancing the state’s economic recovery and rebuilding post-COVID. There are also tangible benefits to the health and safety of Nevadans as air quality would be improved as tailpipe emissions are reduced.

During the climate strategy listening sessions, participants broadly supported shifting away from fossil-fueled vehicles, but also identified issues that need to be considered in shifting toward new and expanded transportation alternatives.“

Just to show the depth and radical change Sisolak is attempting to make, consider the following facts:

According to Sisolak’s own report:

In addition, there are significant economic and national security issues to consider, such as the fact that electric cars require cobalt, which China now controls 100% of the market.

As noted in this report in Bloomberg back in 2018, China was gobbling up cobalt mines and the companies that process it. If America were to go all EV, China would be the sole source of cobalt today.

Democrat leaders who push electric cars have no answer for this and other related supply chain issues for the development and production of electric cars. To say the Democrats are in the back pocket of the Communist Chinese government is an understatement. Democrats like Sisolak, Biden, and Newsom are essentially Chinese assets, clearly doing their bidding. They know these facts, yet they continue to push China’s policies on electric cars intentionally. Sisolak has allowed China to buy up Nevada mining interests along with Nevada farm land and water rights.

Democrats and the Degrowth movement don’t expect to replace 2.1 million gas cars with electric cars. They envision very few folks owning their own cars; they want most people to take the bus or driver-less Uber cars while living in electric tiny homes.