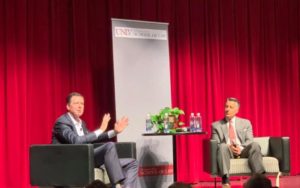 Today, former Nevada Governor Sandoval hosted former FBI director James Comey who was hocking his book “A Higher Loyalty” to foolish college students. According to UNLV officials he was paid more than $100K for his appearance at the UNLV School of Law.

Comey’s secret recording of his meetings with President Trump and subsequent firing sparked the fake Russia investigation that lasted over 2 years with Comey now the subject of criminal allegations by the Federal Department of Justice Office of Inspector General.