ANOTHER THUG BITES THE DUST THIS WEEK

ANOTHER THUG BITES THE DUST THIS WEEK 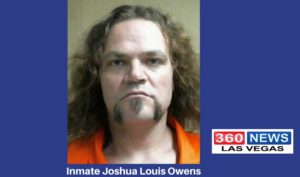 The Nevada Department of Corrections (NDOC) reports that on Tuesday, May 29, 2018, at approximately 12:25 PM, Inmate Joshua Louis Owens, #1021968, died at the Centennial Hills Hospital Medical Center in Las Vegas, Nevada. He had been found unresponsive in his cell at High Desert State Prison that morning. Inmate Owens, a 37 year old male, was committed from Washoe County on January 4, 2017, and was serving a sentence of 19 to 48 months for Resist Public Officer with the Use of a Deadly Weapon. The Clark County’s Coroner Office responded. An autopsy will be scheduled per NRS 209.3815. Next of kin have been notified.