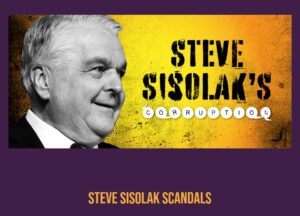 After Sisolak and his outside money have pounded Lombardo for months, even before the primary, Lombardo is now pushing back against Sisolak in what appears to be a brutal and personal battle for the governorship of Nevada. In this new offensive, Lombardo doesn’t hold back. Using numerous news stories as sources, including 360 News and The Nevada Globe, Lombardo goes after Sisolak’s Northshore scandal, his DETR’s failure, and even Sisolak’s failed education and low-income housing policies.

Steve Sisolak’s tenure as governor has been riddled with corruption. Sisolak fast-tracked Northshore, a COVID testing company associated with a major campaign donor that billed $165 million for COVID tests that didn’t work and had an inaccuracy rate of 96%. Nevadans died. Instead of putting the safety of Nevada first, Sisolak covered up the scandal and the inaccurate tests for 5 months, only admitting it when a news investigation exposed one of the most egregious scandals in Nevada history. Sisolak is now facing a federal investigation and has not even returned the campaign cash he took from those connected to the testing company.

While in charge of the state’s employment department, hundreds of thousands of Nevadans have been forced to wait months for benefits, while $471 million was granted to fraudulent claims. Always taking care of himself and his friends, Sisolak put a system in place at the department to take care of his friends while others were forced to wait. Currently, calls to the state’s employment division continue to go unanswered and messages go unreturned. LISTEN HERE

A federal lawsuit recently revealed that while on the Clark County Commission, Steve Sisolak traded his vote on a housing development for the endorsement and support of a progressive organization in his campaign for governor. Records now made public show that Sisolak’s campaign negotiated a deal for Sisolak’s vote on the Clark County Commission. As usual, Sisolak kept the illicit deal a secret until an investigation revealed what he had done.

Steve Sisolak’s wife, Kathy Ong Sisolak, has received government contracts, including no-bid deals, while her husband has been governor. Sisolak did not disclose the money going to his wife and her firm; since it was discovered, he has not stopped any of the payments or contracts. Sisolak is lining his own pockets with our tax dollars, giving his wife no bid for state contracts. This is textbook corruption.

Steve Sisolak is fond of calling himself a small businessman, but the truth is, he ran a telemarketing firm that preyed on senior citizens and other vulnerable Nevadans. Many of Sisolak’s telemarketing associates even went to jail. Sisolak later became a millionaire by suing Clark County over a land deal.

Steve Sisolak’s campaign is bragging about everything he has done for public education, but since Steve Sisolak was elected governor:

Nevada is ranked among the least educated states in the nation.

Sisolak signed a law that allowed violent kids to remain in Nevada’s classrooms with other students, which has resulted in record violence in our schools and caused both children and teachers to suffer in unsafe schools.

Speaking of teachers, 1,700 teachers have quit, and Nevada is now 3,000 teachers short.

Not to mention, In a recent report, CNBC gave Nevada an “F” ranking for its education system and rated it as the worst in the nation.

Another report earlier this year ranked Nevada as the second least educated state in the country. The report also ranked Nevada 49th in educational attainment.

Yet there has been a 46% increase in harassment, threats, and sexual assaults within Clark County School District. When hundreds of teachers reached out to ask Sisolak to do something – anything – about the violence, Steve Sisolak didn’t even bother to respond.

Steve Sisolak has failed to fund the Nevada State Highway patrol, resulting in a 167% turnover rate causing over 130 patrol officers to quit last year alone. Nevada Highway Patrol now has only one-third as many officers as before Sisolak became governor and a 50% vacancy rate of troopers tasked with keeping Nevadans safe. Shockingly just three officers are now patrolling the entire Las Vegas area and responding to accidents, all due to Sisolak’s lack of funding and leadership. The NHP’s union called Sisolak “the most anti-police Governor we have ever worked for.”

Steve Sisolak has failed small businesses. He raised payroll taxes when Nevadans could least afford it and forced shutdowns and mandates on employers that stifled growth and killed jobs. Since he was elected governor, 95,000 small businesses have closed for good. The National Bureau of Economic Research gave Nevada a “D” rating for Sisolak’s economic response to COVID, while Politico ranked Nevada as having the second-worst pandemic response in the entire country.

Steve Sisolak has allowed thousands of state employees to continue to work from home two years after the pandemic. As the head of Nevada’s state government, Sisolak has failed at even his most basic duties. State agencies no longer answer the phone, and the DMV has even announced you can no longer show up in person.

Steve Sisolak has failed to fund the highway patrol, withheld funding for more cops in Las Vegas, and passed a law tying the hands of police by reducing sentences for dangerous criminals and drug traffickers, including traffickers of fentanyl. Sisolak took away the police’s ability to make arrests, allowing dangerous criminals to roam free in our communities. Yet, Sisolak has the audacity to attack law enforcement for crime spikes across Nevada and say that….”Nevada is #1 in the U.S. for funding in law enforcement”, while we know full well because of Sisolak, our officers on the front line protecting us have never been in more dire need of support. Sisolak has a long history of anti-law enforcement policies and actions. Roughly 180 Highway Patrol troopers used to cover Nevada, but under Sisolak, that number is now only about 60. Now, a majority of the time, only three or four troopers are available to patrol significant roadways and freeways in the Las Vegas Valley – home to more than 2.25 million residents and more than 40 million annual visitors. At the beginning of March, the NHP had already lost about 30 officers, in addition to the 136 that left the force in 2021. In March, the Nevada Police Union asked Sisolak to call a special session to help retain current and recruit new officers, but unfortunately, the Governor’s office didn’t believe this was enough of a crisis to warrant action, preventing any action until the regular legislative session in 2023. As Clark County commissioner, Sisolak even ignored public demand for more police on the street, refusing to pass or fund the voter-approved More Cops Initiative twice. If Sisolak had simply done as his constituents asked and passed the More Cops Initiative, there would be hundreds of more police officers able to help keep the Las Vegas area safe today.

Sisolak has tried to attack law enforcement to distract from his failures. He has tried unsuccessfully to attack Sheriff Joe Lombardo and rank and file law enforcement officers to distract from his own pro-criminal policies. Wild claims in paid advertisements like “In 2016, there were marked increases in rapes, robberies, assaults, and homicides” simply don’t hold water.

The facts? Clark County actually reported a decrease in violent crime, while the FBI reported a nationwide increase. There were, in fact, no “increases in rapes, robberies, assaults, and homicides.”

Under Sheriff Lombardo’s management, LVMPD increased its solve rate to over 90%, which is one of the highest in the nation.

Nevada’s business climate has plummeted while Steve Sisolak has been governor. We’ve fallen to the bottom ten states nationally, with an F rating for health care, an F for Innovation and technology, an F for education, and now a D for our cost of living.   Unfortunately, we know that due to Sisolak’s anti-business environment, 95,000 of Nevada’s small businesses have closed for good, and instead of helping small businesses get back on their feet, he added insult to injury by increasing payroll taxes when Nevadans could least afford it.

On the other hand, Steve Sisolak’s wife, Kathy Ong Sisolak’s own company, serves as a consultant to the Governor’s Office of Economic Development. This textbook pay-to-play corruption is even showcased on their website, signaling to all that this Governor’s economic development plan starts and ends with lining his own pockets with our tax dollars.

While Steve Sisolak says he has invested millions of taxpayer dollars into housing projects with little definition or transparent planning, housing prices have skyrocketed, and Nevada ranks dead last in the nation for affordable housing. Housing inventory is almost non-existent, reaching record lows, and rent prices are far out of reach for low and middle-income Nevadans. Nevada’s government, still working remotely, is not working with builders to provide more inventory. Sisolak has no solutions beyond throwing temporary federal dollars at projects that lack specificity or community support.

Speaking of no-solutions-Steve, when Steve has a solution to fight back against this looming recession and claims multiple times to want to lead Nevadans down the right path with “no new taxes,”. We know, unfortunately for Nevadans, that this is just campaign rhetoric. In 2019 and again in 2021, Steve Sisolak signed tax increases, even saying that he was “so proud” of it.