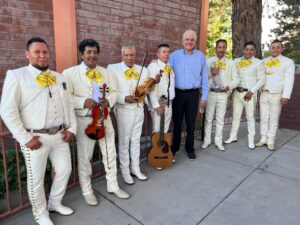 Democrats believed they “owned” the Hispanic vote for the last decade. Dems automatically put Hispanics in their column when calculating likely election results. But Dems’ lurch to the far left economically and their insane transgender anti-family agenda has turned off millions of Hispanics moving them into the Republicans’ column.

The Hill reported this week:

“A New York Times-Siena College poll this month found that only 41 percent of Hispanics said they intended to vote for Democrats in the upcoming midterms, while 38 percent said they preferred GOP candidates.

Statisticians warn that polling of Hispanic voters is particularly difficult, and national polls that use likely voter models have historically missed the mark.”

So it should not come as a surprise to see the same trend here in Nevada. IN the latest poll only 42% of
Hispanic voters indicated they intend to vote for Sisolak, while 44% said they’re voting for Lombardo,
with 8% indicating they would vote none of the above and 6% are undecided.

“Governor Sisolak and Joe Biden’s bleak approval ratings are a referendum on the Sisolak-Biden agenda, which has left most Nevadans worse off than they were four years ago. Meanwhile, Sheriff Lombardo’s support among Independent and Hispanic voters shows just how eager Nevadans are for new leadership.”

The Tarrance Group conducted the survey of voter attitudes in the state of Nevada. These key findings are based on telephone interviews with N=600 “likely” registered voters throughout the state. Responses to this survey
were gathered July 5-10, 2022 and the margin of error associated with a sample of this type is +
4.1% in 95 out of 100 cases.

• The race for Governor Nevada is a statistical dead heat with Joe Lombardo getting 44% of
the vote and Steve Sisolak at only forty-six percent (46%) of the vote. There are 5% who
would vote NOA and 5% are undecided.

• This survey mirrors the public polls that have caused the top national political handicappers
like The Cook Political Report and Larry Sabato’s Crystal Ball to rate the Nevada
Governor’s race as one of only three gubernatorial races in the country that is a “pure
tossup.”

• Sisolak has been “stuck at a ceiling” of 46% of the vote for the past six months, which is an
extremely weak position for an incumbent to be in. The combination of the political
environment and his weak image and incumbency ratings portends that his ballot is held
hostage by a significant desire for change.

• Sisolak is stuck at this forty-six percent (46%) ceiling due in large measure to his poor
performance among both Independent voters and Hispanic voters. Sisolak is down at only
thirty-three percent (33%) of the vote among Independents and trails Lombardo by -16.

• It is also important to note that the ballot exists like this after national Democrat groups have
spent over $6 million on attack ads against Lombardo. The Democrats have already taken
their best shots – and the race is still a statistical dead heat.

• The political environment in the state is amongst the worst facing Democrat candidates in
any state this cycle. Fully fifty-six percent (56%) of Nevada voters disapprove of the job that
President Biden is doing.

• Adding to the difficulty for Democrats is the fact that voters have a negative view of the
direction of the state, and not just the country. Almost half of Nevada voters, forty-eight
percent (48%) indicate that they believe things in Nevada are off on the wrong track.

• This has caused key voter groups that have typically been part of the Democrat coalition for
victory to “walk away from the party.” Most significant among these groups are Hispanic
voters, who are so laser-focused on economic problems and hardships, that a majority of
them now indicate that they would vote for the generic Republican candidates for Governor,
U.S. Senate, and Congress.

• Younger voters, another key traditional Democrat base group, are facing the same economic
hardships and pressures, and are now evenly divided in their support for generic Republican
and Democratic candidates.

• Projecting forward to the sort of question that Independents and ticket-splitters will be asking
themselves in October, their disenchantment with President Biden and the reckless spending
of the national Democrats has created a +14 advantage for Republicans in their generic party
preference.

• Fully fifty-two percent (52%) of Independents indicate that, in the gubernatorial election,
they will vote for the candidate who will be a “check and balance on the Biden
Administration and Congressional Democrats.

• Governor Sisolak has also failed to develop either an image or a job approval for himself that
is required of an incumbent in order to be re-elected, especially in a situation like this where
there is such dissatisfaction with the direction of the state.

• Both Sisolak’s favorable rating and his job approval rating are completely polarized at a one
to one positive to negative ratio, with his positive ratings below the crucial 50% mark. It is
also important to note that there is higher “intensity” to his negatives than there are to his
positives.