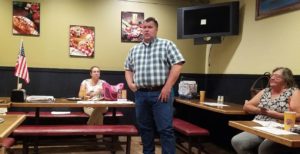 Newly elected Nevada Governor Sisolak recently signed into law a bill commonly known as the Universal Background Check by its supporters. The law was touted as a way to shut what they viewed as loopholes in the firearm purchasing process and that it would make a previously passed law (question one) both enforceable and able to be put into practice.

In review of these laws I tried to look at it from several viewpoints, one being that of a citizen who enjoys the ownership of firearms, the heritage and family traditions of firearm collection, hunting, sport shooting and passing on treasured firearms from one generation to another as well as to family friends.

In review of these laws from that position I was extremely troubled as I did not view the laws as enforceable as written and put restrictions on law abiding, honest gun owners and it did nothing to realistically address the issues of firearms being in the hands of criminals or those with mental illness. I viewed the law as a stepping stone, one that when the supporters of this law realized it for what it is, an unenforceable law as written, that they would then try to take the next step and try to enforce a firearm registration, I found that to be repulsive and out of line.

I then looked at it from a law enforcement standpoint and again came to the conclusion that the law is unenforceable as written. I strongly believe that this law will be challenged in court and will need to be rewritten to remain on the books. I have been asked if I will be sending a letter to the Governor regarding the gun laws and stating that we, the Churchill County Sheriff’s Office, won’t be enforcing them. I have been further asked to move to declare our county as a sanctuary county for the Second Amendment.

Here is my response to those questions: First and foremost I have always sent letters to my state and federal representatives expressing my viewpoint and either pleasure or displeasure with their actions and I strongly urge others to do so as well. I have been told by some that they view these actions of writing our government officials as pointless and will result in nothing. I would argue against that based on the following quote from Abraham Lincoln at Gettysburg describing our Government as “… government of the people, by the people, for the people….”. If we believe this and I do, then I believe we as “the people” need to be engaging our law makers in conversation, we need to let them know that we, you, I, do not want certain things, that we do not agree with their decisions or the laws they are passing.

In regards to the sanctuary county request, I have researched this and read several resolutions and ordinances from around the nation, some of these are done in mere defiance to the state and others are well thought out and worded, however are now being challenged as themselves being unconstitutional and viewed by some legal minds as an extremely slippery slope. In this regard, I want to do more reviewing of these declarations before any such action is taken by me as your Sheriff and elected official.

Twenty years ago I took an oath to uphold the Constitution of our great country, earlier this year I repeated this oath after being elected to be the Sheriff of Churchill County. I did not take either of these oaths lightly or with anything less than full respect and intent to honor them. I have stated a number of times I support the Constitution and all of its amendments, I am a life member of the NRA and an avid hunter and proud firearm owner.

Please rest assured, we the Churchill County Sheriff’s Office, under my guidance, will not be coming to collect your firearms unless so ordered by the courts after you have received your due process.